Once the United States officially entered World War II in 1941, the grocery industry was turned upside down in some dramatic ways. Retailers and suppliers lost tens of thousands of men to military duty, and as a result, women took on new roles. Meanwhile, food supply chains were tested as never before, prices on goods skyrocketed and new behaviors were established.

American consumers were forced to be resourceful and conserve food and other basic needs, while retailers administered wartime initiatives such as rationing, price ceilings and allocations. Even gasoline was rationed, and as a result, auto registrations dropped by 2 million from 1940 to 1945. This change gave way to less frequent shopping trips and more one-stop shopping. 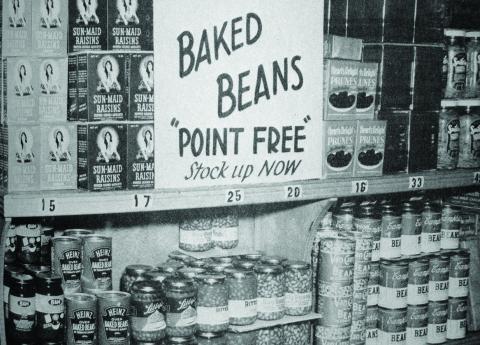 Among their other wartime duties, grocers also promoted a series of War Bond campaigns; sponsored scrap drives; collected materials for recycling, including aluminum, steel and fats; and made an effort to cut down on the use of paper bags while educating customers about conserving and reusing bags.

Even during war, when there were product shortages to contend with, grocery sales continued to grow. “Business is excellent — in every line with sufficient goods to sell,” wrote Progressive Grocer’s editor, Carl Dipman, in January 1943. Food prices had risen to a new high: The cost of meat was up 19.5%, and fruit and vegetable prices had shot up 28.2%, versus November 1941.

To cope with the dramatic inflation, some Americans grew “victory gardens” to combat the high prices and food shortages. These vegetable, fruit and herb gardens were planted at private residences and public parks. In fact, by 1944, an astonishing one-third of all of America’s fresh vegetables were harvested from these gardens. 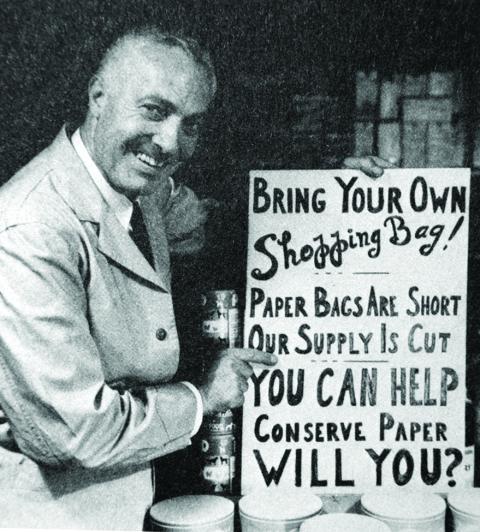 After the government asked retailers to cut their use of paper bags by half, grocers got creative and devised solutions like “long bags” that were durable enough to be reused.

After the war finally ended in September 1945, U.S. consumers were in the mood to shop again, and like never before. The good news was that supermarkets had ample sources of supply, especially since the government had released its giant food reserves that had accumulated during the war.

In the free-spending post-World War II era, food stores were rapidly adopting self-service to ensure more efficient, labor-saving operations. In 1946, 31% of stores had self-service, and sales per full-time employee in self-service stores had risen to around $26,000 a year. As operating expenses were kept lower, margins averaged 15% to 20% of sales.

Toward the end of the decade, supermarket construction began picking up again, and new stores featured such amenities as modern cash registers, scales and coffee mills, while metal fixtures came into general use now that the war was over.

Sales in 1951 were practically double the peak war years, totaling more than $37 billion. By this point, supermarkets enjoyed 39.8% of grocery store sales.