An unlikely set of circumstances gave rise to the first issue of Progressive Grocer 100 years ago, in January 1922. A new in-law in the Butterick family, well known at the time for its dress-pattern business, had an interest in the grocery business and that led to the launch of a publication focused on the rapidly changing industry. That’s how the origins of the brand were described by The New York Times in 1972, around the time of Progressive Grocer’s 50th anniversary. 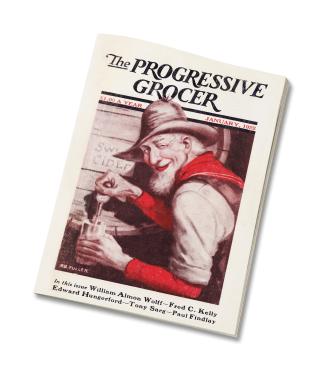 Publications such as Time and Reader’s Digest also debuted during the 1920s to serve Americans’ news and entertainment needs. Like Reader’s Digest, Progressive Grocer’s early editions were in a pocket-sized format designed to fit in the aprons worn by grocers of the era.

Billed as “The National Magazine for Retail Grocers,” The Progressive Grocer provided “practical, helpful information of what the other fellow is doing to get more business and to make more money.” The publication was complimentary, “in the spirit of service,” and the publisher promised to send it monthly if readers requested it.

• By 1925, The Great Atlantic & Pacific Tea Co. (A&P) was running almost 14,000 stores, which included its “no-frills” format, and the A&P Economy Store, in Jersey City, N.J., as well as combination stores that included space for meats, produce and dairy. In 1924, “The A&P Radio Hour” was launched as America’s first national radio program.

• Other grocery banners that got their start during the decade included Piggly Wiggly, founded by Clarence Saunders and widely credited as introducing America to self-service shopping, and Coborn’s, which opened its doors in central Minnesota in 1921.

• By 1920, Kroger, which was founded as the Great Western Tea Co., had begun a process of rapid expansion beyond the Cincinnati area. The company operated almost 6,000 self-service stores by the end of the decade and stood out for its in-store meat departments.

• Safeway was founded during the 1920s. In 1915, M.B. Skaggs purchased a store from his father in American Falls, Idaho, and by 1926 he was operating 428 Skaggs stores in 10 states. He almost doubled the size of his business that year, when he merged his company with 322 Safeway (formerly Selig) stores. Two years later, M.B. Skaggs listed Safeway on the New York Stock Exchange.

• By the end of the 1920s, National Tea had more than 600 locations in the Chicago area alone, and another 1,000 stores nationwide.

An introductory letter in the premier issue called for more cooperation among retailers and wholesalers. “During the [1917-18] war, and in the period of reconstruction, we have heard and read much of eliminating the so-called ‘Middleman,’” the editors wrote. “We are convinced, however, that no method has yet been developed that can more economically serve the consumer than the present triumvirate of manufacturer, wholesaler and retailer.”

Feature articles included “What Does the Future Hold for the Independent Grocer?”; “Look After Your Fruit and Vegetable Business”; “What Should the Grocer Know About Turnover?”; and “Attractive Displays that Sell Merchandise.” Alongside those timeless themes, the publication had a lighter side, including a section with grocery-related jokes called “The Cracker Barrel” that would become a regular feature.

The industry was highly fragmented in the 1920s, with an estimated 350,000 retail grocers. The majority of these stores featured a growing selection of packaged groceries (with limited perishables), and some were experimenting with more eye-catching front-window displays. Glass-case counter arrangements were quite popular, but most merchandise was still displayed out of shoppers’ reach.

According to the PG archives, the first Census of Business taken in 1929 listed 10 major kinds of food stores. No one format dominated, but the one-stop combination market (with meat) headed the list, with 31% of total sales. Grocery stores without meat came in second, with 27% of sales. The general store had declined to third position, with 11% of sales.

Changes that were beginning to happen in the industry in the 1920s made The Progressive Grocer the perfect brand identity for a new magazine. Chain stores were growing, and independents were fighting back. Since most independents operated credit-and-delivery stores with relatively high operating expenses, less service-oriented chains were able to cut costs and became a major competitive challenge. In 1926, a group of independent grocers in the Northeast banded together to form the Independent Grocers Alliance (IGA).

In October 1927, The Progressive Grocer reported that “now that the independent merchant is learning to conduct his business more efficiently, there is no longer the wide gap between the chain’s prices and the service grocer’s prices.” 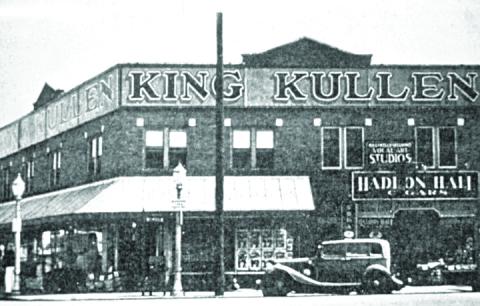 King Kullen is widely credited as the first U.S. "supermarket."

Debut of the Supermarket

King Kullen is the banner that’s widely credited as the first U.S. “supermarket.” The retailer opened its doors in 1930, in a garage in Jamaica, in the New York City borough of Queens. Its founder, Michael J. Cullen, was a former A&P employee who had reportedly proposed his idea to A&P and Kroger (another former employer), but they both turned him down. Cullen came up with a plan to sell 300 items at cost, 200 at plus 5%, 300 at plus 15% and 30 at plus 20%, and establish a low-rent location, night hours, cash and carry, self-service, and aggressive advertising, calling his store “The Greatest Price Wrecker.” Two years later, Big Bear opened in Elizabeth, N.J., calling itself “The Greatest Price Crusher.”