Walmart was probably one of the most frequently mentioned names in Progressive Grocer during the 1990s, and for good reason: The company opened hundreds of supercenters, made its first international investments, debuted the Neighborhood Market supermarket concept and achieved enviable profitability at a time when many traditional grocers wrestled with a recession early in the decade.

Yet, as competition from Walmart and other retail formats resulted in a race for the survival of the fittest, a number of regional grocers upped their games during these years to defend their market territories, and the industry as a whole turned to a new form of retailer supplier collaboration known as Efficient Consumer Response (ECR) to remove costs and increase customer focus.
The decade started out on shaky ground economically, as retailers found themselves in the midst of a recession, with mounting concerns such as energy costs, a weak labor market and the escalating cost of health care. 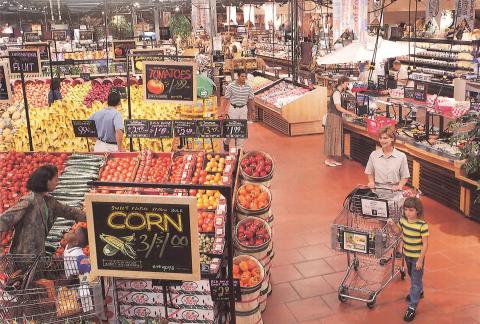 More grocers highlighted perishables and services in an effort to stand out against the discounters that reigned on deals.

To attract more price-conscious shoppers, many grocers mirrored the Walmart approach of everyday low pricing. Meanwhile, private label experienced a resurgence, proving that this strategy had more staying power, especially as the quality was better than the early versions of generics introduced decades earlier, and retailers soon recognized the power of private label as a means of differentiation. In fact, one supermarket executive even proclaimed in the pages of PG that the 1990s would later be viewed as “the era of the private brand,” although he predicted that the supermarket mix would always favor national brands.

Retailers also increasingly turned to technology to tackle expenses, including higher energy costs. For instance, Big V Supermarkets trimmed its electrical costs by 29% compared with other chains’ average costs, thanks to a computerized energy management system.

• A decade of aggressive M&A activity began in 1990, when A&P acquired Miracle Food Mart, out of Canada.
• In 1992, Randalls acquired Cullum Cos., operator of the Tom Thumb/Page chain in Dallas. A $1.1 billion merger of Supervalu and Wetterau restored Supervalu to the No. 1 wholesaler position and gave the company its Save-A-Lot limited assortment format.
• In 1995, The Kroger Co. became the first supermarket to take grocery orders for home delivery via the internet.
• Target Stores opened its first Super Target, featuring a full grocery assortment, in Omaha, Neb.
• In 1996, Wild Oats and Alfalfa’s merged and filed an IPO, and Whole Foods Market bought Fresh Fields.
• Ahold increased its U.S. portfolio with the purchase of Stop & Shop, while Delhaize acquired Hannaford in 1999.
• In 1997, Safeway acquired Vons, and Fred Meyer purchased Smith’s Food & Drug and reached an agreement to buy Ralphs Grocery Co. and Quality Food Centers (QFC).
• In 1998, Kroger merged with Fred Meyer to form a multiregional supermarket operator.

Competition for food dollars intensified in 1992, thanks to club stores, deep discounters, mass merchandisers and even chain drug stores that recognized the traffic-generating power of consumables categories. Overall grocery sales reached $382.6 billion, with sales at supermarkets specifically coming in at $286.3 billion.

Faced with such sluggish growth and an imbalance in trade relations, retailers turned to a new concept to improve their operations. Officially launched in 1993, ECR was designed to help the traditional grocery sector become more responsive to consumer demand while promoting the removal of unnecessary costs from the supply chain.

The second half of the decade brought about progress in the form of the dot-com boom, but for traditional grocers, growth was an uphill battle. Some of the more forward-thinking regional grocers, including Harris Teeter, Publix, Byerly’s, Genuardi’s Family Markets, Wegmans, Schnucks and Dominick’s, made the most of their collective wisdom via share groups and used their own insights and differentiation emphases to become leaders in their respective markets.

While grocers were differentiating with ancillary services, nontraditional natural and organic food retailers were gaining in popularity. The largest of these was Whole Foods Market, which would end the decade with more than 100 locations. Other grocers would start featuring natural and organic products in special departments.

As the composition of the grocery industry changed, conventional grocers countered by gaining scale. At the end of 1998, Albertsons, Safeway and Kroger were the three leading grocery chains in the United States, and the top five grocers accounted for an estimated 29% of all U.S. supermarket sales. Additionally, despite the lack of inflation, total sales had increased a healthy 3.5% to $472 billion, according to PG’s Annual Report that year.