Despite the looming impact of the Great Depression, the 1930s saw innovation in food retailing, coupled with new competition regulations designed by President Franklin Delano Roosevelt.

On the heels of the supermarket’s debut in 1930, an increasing number of grocers began rolling out their own versions of larger self-service stores, especially in more densely populated areas. William H. Albers, who was a former president of Kroger, began opening supermarkets around Cincinnati in 1933. His stores were known as Albers Super Markets. Meanwhile, Kroger, for its part, had 50 supermarkets by 1935. 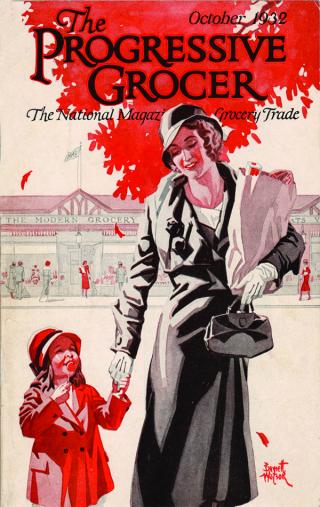 A&P opened its first supermarket — a 28,125-square-foot store in Braddock, Pa. — in 1936. Toward the end of the decade, A&P began consolidating its thousands of small-service stores into larger supermarkets, often replacing as many as five or six stores with one large new one.

And down south, Publix debuted Florida’s first supermarket in 1940. Company founder George Jenkins mortgaged an orange grove he had acquired during the Depression for a down payment on the store, which was his “dream come true” featuring marble, glass and stucco décor, along with such modern features as air conditioning, fluorescent lighting, electric-eye doors, frozen food cases and piped-in music.

• As grocers became more creative with their merchandising, Progressive Grocer was there to help. The November 1934 issue featured an article promoting “food gifts” for Christmas, and the magazine even offered professionally designed display posters that could be ordered “at a very low cost” (50 cents for a set of eight posters).
• A new Kroger store in Lima, Ohio, offered a year-round roasting service that was turning a profit. Since the store had both a delicatessen and kitchen, employees offered to roast hams, chickens and turkeys for busy home hostesses, charging $1.25 per meat item for roasting, and also offering special glazes or even stuffing.
• One independent store in East Orange, N.J., managed to grow its sales volume $100,000 a year during the Depression by expanding into a “combination food market” selling everything from fresh meat to produce and frozen foods (45% of its sales were from meat, compared with 35% from groceries). The store was operated by Maxmilian Kusy & Son, a company that started off as a meat dealer and also supplied hotels and local restaurants with meat.
• In an effort to make transporting groceries less cumbersome, store owner Sylvan Goldman designed the first shopping cart in 1937. He worked with mechanic Fred Young to come up with the concept, which started out as a metal frame that held two wire baskets. It took customers some time to get used to the idea (men felt that the carts would make them look weak, young women thought they were unfashionable, and older people didn’t want to appear helpless), but by 1940 the invention had graced the cover of the Saturday Evening Post.

Even as retailers were becoming more innovative, however, they still had to face financial challenges brought on by the Great Depression. The January 1935 issue of Progressive Grocer noted that total retail sales declined an unbelievable 49% from 1929 to 1933 (retail sales of all kinds sold through all types of stores). By comparison, food stores showed a slightly smaller decline — 37%. The number of food stores declined just 5%.

Role of Government in Fair Trade

During this decade, the government started getting involved to make sure that business was being conducted fairly and ethically. The National Recovery Administration (NRA), a primary agency in FDR’s New Deal government, was established in 1933 to eliminate “cut throat competition” by bringing industry, labor and government together to create codes of “fair practices” and set prices.

PG’s editors voiced the concerns of the industry, noting in the January 1935 issue, “One of the matters of greatest interest to the grocers and all business, is what is going to be done by Congress to the NRA.”

Luckily for them, later that year, the U.S. Supreme Court unanimously declared that the NRA law was unconstitutional. The National Association of Retail Grocers, for its part, pledged to keep ideals and objectives in fair-trade practices in food merchandising.

Even though the NRA stopped operations, many of its labor provisions reappeared in the National Labor Relations Act, passed the same year. This set the stage for a surge in the growth and power of unions, which became a central part of the New Deal Coalition that dominated national politics for the next three decades.

Just a year after the NRA disbanded, in 1936, a law intended to further level the retail playing field was enacted. The Robinson-Patman Act, commonly referred to as “the chain store act,” helped correct discount abuses and established guidelines under which food retailing and wholesaling could be carried out on a fair basis. 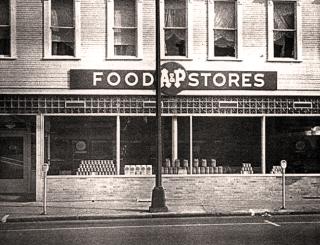 By the second half of the decade, business was doing significantly better. Retailers closed 1937 at a high level, and Christmas trade was the best it had been in many years, Progressive Grocer reported.

As business began perking up, independent operators were holding their own. In its January 1937 issue, PG’s editors recalled that in 1936, “independents on the whole gave chains the stiffest competition of their lives.”

While some independents developed supermarkets on their own, others joined forces with wholesale grocers, and many became affiliated with large voluntary or cooperative wholesale groups. At the same time, a growing number of chain stores opted to go independent. For example, the chain stores owned by S.M. Flickinger Co., out of Buffalo, N.Y., were being converted into independently owned voluntary stores.