As competition heated up, supermarkets started considering the specific demographics and tastes of their shoppers more during the 1970s, and this resulted in a plethora of formats, specialized merchandising and more targeted promotions.

Even by the mid-1960s, Progressive Grocer had begun advising its readers to think more about meeting the needs of individual consumers, especially as competition intensified. Demographic information was becoming more readily available, thanks to advancements in electronic data processing, so this armed companies with better insights on their shoppers, even if such information was rudimentary by today’s standards.

To target higher-income shoppers who were willing to spend more, retailers advanced the idea of the gourmet aisle, while some went more upscale with new formats. H-E-B’s “red carpet store,” which opened at the end of 1969, featured wall-to-wall carpeting, redwood wall decoration and a “tasteful use of color.” It was more than 30,000 square feet, with nearly 50% of selling space that included expanded nonfoods, a broader merchandise assortment, separate imported and fancy-food sections, and service cosmetics. 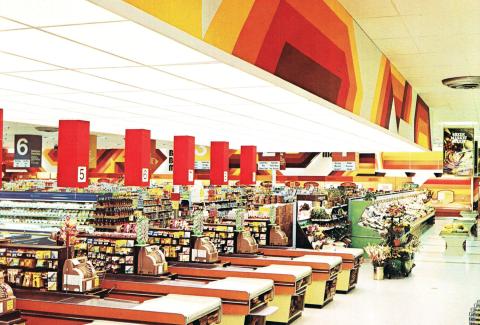 The arrival of the UPC code and optical scanning technology sped up the checkout process.

Kroger decided to go big when it launched its superstore format in 1972. It certainly wasn’t the first retailer to test a larger format with a major focus on nonfoods; Mejier had debuted its 180,000-square-foot Thrifty Acres store a decade earlier. But Kroger executives had decided to exit the markets where their stores weren’t as competitive, and to significantly upgrade stores to keep up with industry standards.

Kroger’s superstores were often 60,000 square feet, which was up to 50% larger than the company’s traditional units. In addition to having a brighter color scheme, the format placed more emphasis on service departments.

• In 1972, Progressive Grocer was profiled in The New York Times, on the occasion of its 50th anniversary. Charles S. Mill, president of American Business Press, noted that PG “dominates the field” and that “people in the grocery field don’t move without it.”
• In 1977, Dutch retailer Ahold expanded internationally and acquired Bi-Lo Stores.
• The same year, the Food Marketing Institute was formed through the merger of Super Market Institute and the National Association of Food Chains (NAFC). Robert Aders, former U.S. undersecretary of labor, became its first president and CEO.
• Private label products started appearing in stores more frequently as generic alternatives to national brands.
• In 1979, the Tengelmann Group, of Germany, bought 42% of A&P stock for $78.6 million.
• As spending for food away from home grew at five times the rate of food eaten at home, chains such as Pathmark tested fast-food takeout operations in or adjacent to their stores.
• Foodarama (Shop Rite) Supermarkets, of Freehold, N.J., entered the gas station field when it opened its first station under the Shop-Rite name, in Neptune, N.J.
• Hinky Dinky, in Iowa and Nebraska, tied one of its in-store terminals into a First Federal Savings & Loan Association of Lincoln computer. Customers could make deposits and withdrawals in their own accounts.

The larger stores were an immediate success for the company, and went on to ensure its long-term growth. By the end of 1974, Kroger had opened 300 new stores and converted 250 existing ones into superstores.

Another format that gained a lot of attention during the 1970s was the warehouse supermarket, which was a direct response to cutting operating costs and providing lower prices. Examples included Thriftimart, Penn Fruit, Acme and Pantry Pride.

In addition to retail experimentation, the 1970s saw the arrival of the UPC code and scanning technology, which sped up checkout and marked the beginning of grocery becoming a data-driven industry. The scanning era began on June 26, 1974, at a Marsh supermarket in Troy, Ohio, with a pack of Wrigley’s gum.

During the decade, optical scanning operations were installed in several thousand supermarkets. This new technology eliminated punching the keys of a cash register and accelerated the checkout process greatly.

In addition to these technologies, data processing went from being merely an accounting and record-keeping tool to also managing inventory at the store and warehouse level. Some of the cool tests among grocery chains at the time included Stop & Shop’s warehouse simulation, Jewel’s pricing strategy work and Supervalu’s site selection programs, as well as more that were being “closely guarded.”

While the decade started out with high inflation leading up to a recession in 1975, business got better by the second half. PG’s 1976 Annual Report of the Grocery Industry reported that sales were $143.25 billion — a 9.5% gain.