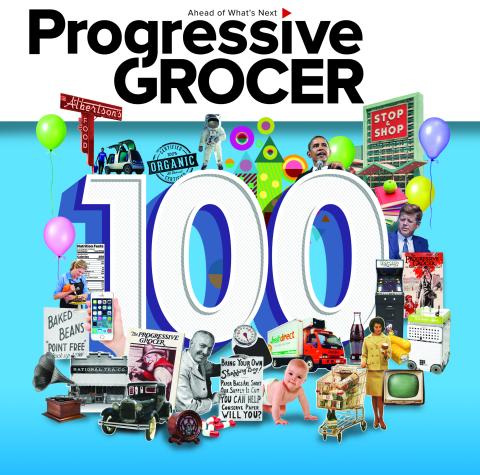 One hundred years is a long time, especially in the business world, where few companies manage to stay relevant for such an extended period. This is especially true in the retail industry, and grocery in particular, where only a handful of companies have sustained operations for 100 years. Progressive Grocer is among those that can claim this notable accomplishment.

Our first issue was published in January 1922, and to put in perspective how long ago that was, consider that it was only a decade earlier that Arizona and New Mexico had become states. World War I had ended just four years earlier, and the nation’s population of 117 million was only a third of what it is today. Automobile ownership was limited but growing quickly, and commercial flights were just beginning. Households in cities and towns were quickly gaining electricity, but only about a third of the population had telephone service, and refrigerators wouldn’t become common until the 1940s.

The way that grocers operated in 1922 was also very different. Stores were tiny, and assortments and operating hours were limited. The industry was male-dominated, as evidenced by references to grocers as “he” and “him” in early issues of the pocket-size magazine. The right of women to vote had only been granted two years earlier with the ratification of the 19th Amendment. It was a time of great disruption and transformation in society, and the grocery industry was beginning to modernize quickly. Against this backdrop, PG was introduced with a simple value proposition.

“In the spirit of service, we take pleasure in sending you the first issue of The Progressive Grocer” is how the editor at the time described the vision for the brand.

The statement is simple, elegant and enduring. Proper credit is due to those who established the brand with a guiding philosophy so straightforward that it could be executed by their successors. Our archives reveal a brand that consistently delivered on that purpose, chronicling significant changes that happened throughout the decades and sharing useful information to help grocers do their jobs better. PG has filled an important role as a trusted source of information to the industry, even as the methods of sharing information have changed and become increasingly digital.

Whatever the delivery method, from a pocket-size periodical to mobile alerts and browser notifications, the founders of the brand were wise to adopt a service philosophy, doing so long before the concept of “purpose-driven” became common for so many organizations.

We hope that the service philosophy is as evident today as it was during PG’s early years, because the need for information to help grocers succeed has never been greater. While the forces that drove change in the 1920s and beyond were automobiles, electricity, refrigeration and quickly evolving social norms, today the list includes the internet, mobile devices, automation, new distribution channels, shifting demographics and product preferences, and the forces of sustainability permeating retail operations and shopper expectations. Tomorrow, it will be something else, something as unimaginable to us today as the internet and mobile devices were to people in the 1920s.

That’s fine. As long as PG maintains the spirit of service on which the brand was founded, it will be able survive unforeseen changes, continue to help grocers succeed and remain relevant for another 100 years.