(Editors' note: This is part two of a five-part series)

The future looks bright, at least according to supermarket operators. Last year marked a return to increased optimism, but this year, retailers looking forward need to wear shades, with 51 percent of respondents to Progressive Grocer’s Annual Report survey saying that they’re more optimistic about the retail climate than they were last year. This number is the highest it’s been since 2011, when the outlook hit a high of 54 percent – the highest in the past decade.

Looking forward to the rest of 2018, nearly half (42.3 percent) of retailers predict a good year, ranking the rest of the year as an eight or above on a 10-point scale, with 10 being sensational and one being awful – more than 82 percent foresee the rest of year as a six or higher. Even looking back at 2017, retailers retained their rosy outlook, with a quarter (24.4 percent) ranking 2017 as an eight or higher and nearly three-quarters (71.1 percent) as at least a six.

However, for those retailers operating smaller chains of fewer than 50 stores, the optimism is somewhat more muted, with only one-third foreseeing a great 2018 (an eight and above ranking), compared with the 42.3 percent overall), and just 20 percent looking back at 2017 as a great year (again, an eight and above ranking), compared with 24.4 percent overall. While smaller supermarket companies are often credited as being more nimble and able to adjust to change, they also don’t usually have the financial resources to withstand a drawn-out fight for consumer dollars and market share that a larger chain can make use of.

Much of the overall optimism could stem from two things: consumers’ own optimism, and the fact that many of the industry’s bogeymen are out in the open.

First, consumer confidence is at its highest level since 2000, with The Conference Board Consumer Confidence Index hitting 130.8 in February.

“Consumers’ assessment of current conditions was more favorable this month, with the labor force the main driver,” said Lynn Franco, director of economic indicators at the New York-based board. “Despite the recent stock market volatility, consumers expressed greater optimism about short-term prospects for business and labor market conditions, as well as their financial prospects. Overall, consumers remain quite confident that the economy will continue expanding at a strong pace in the months ahead.”

Second, while the industry is struggling with recent store closures –Walmart closed 63 Sam’s Club stores, and Southeastern Grocers filed for bankruptcy and revealed that it would shutter 94 stores, to name just two examples – other troubling situations have become clearer. Whole Foods Market’s dicey financial situation has been resolved by its acquisition by Amazon, although the “fallout” from that move has yet to be fully seen, especially how the company’s ecommerce arm will truly affect grocery business. Further, both Walmart and Kroger are investing in technology by expanding or introducing scan-and-go technology to allow customers to skip the bottleneck at checkouts, and retailers across the country are ramping up delivery and click-and-collect programs to better compete.

Also, Lidl entered the market to great fanfare and much publicity about the total number of stores it planned to open. The German discount retailer stumbled a bit out of the gate, scaling back its plan to have 100 stores open within a year of opening its first in June 2017. It currently operates about 50 stores, with plans to open about 20 more. Aldi, another German price discounter, is also expanding store locations– it added 150 in 2017 – and updating store décor. These moves by value grocers are putting pressure on traditional retailers to keep prices low despite the easing of food deflation. 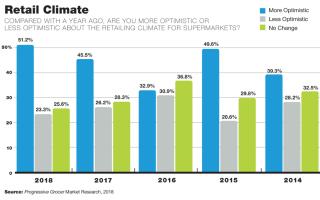 Many retailers complain of their operating areas being overstored (even as food deserts persist in the United States), but store growth has remained fairly stagnant, with 38,571 total supermarkets open at the end of 2017, compared with 38,441 the previous year.