(Editors' Note: This is part two of a five-part series.)

If you listen to some media reports, brick-and-mortar retail is doomed. Grocery operators remain relatively optimistic about the retail climate, however, with 45 percent more optimistic than a year ago and one-third reporting the same level of optimism compared with a year ago. This is down slightly from last year, when 51 percent reported increased optimism, and only a quarter felt the climate would remain the same.

Progressive Grocer also surveyed consumers about how they felt about their own personal finances, which will affect how much they spend in grocery stores. Their optimism is slightly lower, with 43 percent being more optimistic about their finances from a year ago, and then, in common with retailers, one-third indicating no change in their financial outlook.

While 350 food stores closed in the past year or so, including Southeastern Grocers, which closed 22; The Fresh Market, which shuttered 15; and Tops Market, which shut down 10, John Ross, the CEO of IGA Inc., chooses to see this as an opportunity.

“The [media] is talking about a plague,” he noted during the recent IGA Global Rally in San Diego, “but it’s really a renaissance. The shopper is asking us to change and expand.”

It’s up to retailers to listen to customers, and then provide the solutions they’re asking for.

The market bifurcation continues as shoppers move away from the middle. Growth in the grocery sector is coming from either end of the shopping spectrum — an uptick in discount providers like Aldi and Lidl, as well as growth for those retailers with specialty or upscale offerings. The dollar volume for those stores at the upper end is four times higher than discount spending, Ross noted in his presentation.

Ross also stressed that food is actually in a growth pattern, with more Americans becoming more interested in what they’re eating, and the food industry isn’t going anywhere as the population of the country continues to grow.

(Learn more about how Ross views the industry in this Q&A with him.)

Many retailers seem to agree with Ross that the current climate is an opportunity, with 50 percent of them ranking their company’s prospects for the remainder of the year as an eight or higher on a 10-point scale, with 10 being sensational. This is up slightly from the 42 percent who felt that way a year ago. Only 38 percent felt 2018 rated a ranking of 8 or higher.

Consumers as well are sensing better days ahead, with 37 percent rating their optimism for the rest of the year as an 8 or above on a 10-point scale, according to PG research. The Conference Board Consumer Confidence Index hit 131.4 in February, up slightly from last year, when it was 130.8. 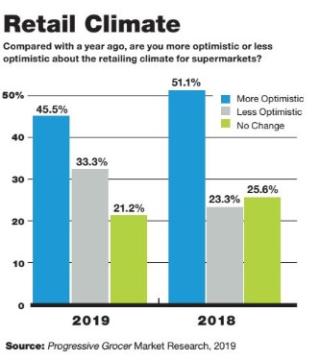 “Consumer confidence rebounded in February, following three months of consecutive declines,” said Lynn Franco, senior director of economic indicators at The Conference Board. “The Present Situation Index improved, as consumers continue to view both business and labor market conditions favorably. Expectations, which had been negatively impacted in recent months by financial market volatility and the government shutdown, recovered in February. Looking ahead, consumers expect the economy to continue expanding.”

Operating costs are expected to continue to rise, with 82 percent indicating a rise in wage costs and 70 percent foreseeing an increase in benefits costs. Nearly two-thirds are expecting their technology spend to increase, which seems to fall in line with where the retail market in general is headed, thanks to increasing consumer demand and/or acceptance of ecommerce and other digital solutions like scan-and-go technology and autonomous-vehicle delivery.

Two-thirds of retailers predict an increase in retail prices for 2019, which may help offset some of their other rising costs, but only one-third of retailers are expecting their percent net profit to increase, while slightly more — 36 percent — are expecting it to stay the same for 2019 compared with 2018. For percent gross margin, 40 percent expect it to increase, and the same number expect it will remain the same.