(Editors' Note: This is part three of a five-part series.)

As they face increased competition from such contenders as a certain online behemoth and two well-publicized deep discounters of German origin that are expanding their respective reaches in the United States, with more locations offering a typical combination of bargain prices and signature private label items, traditional grocers’ need to differentiate becomes more crucial than ever in the quest to attract — and keep — customers.

Still, a renewed focus on the fundamentals may be just the key to edging out their retail rivals.

When asked which department was the most influential in driving their overall brand/ image/point of differentiation, 33 percent of respondents to the 2019 Annual Report survey chose meat, which was a top choice last year, but at just 21 percent, indicating that grocers are doubling down on the tried and true when positioning themselves to stand apart from the retail pack.

While last year, produce tied with meat as most influential, this year it was second by a full 10 fewer percentage points, chosen by 23 percent of 2019 survey respondents.

Next came deli/prepared foods, selected by 12 percent, slightly down from 2018’s 15 percent, and private label, at 7 percent, a six-percentage-point slide from 13 percent last year.

Gourmet/specialty and center store tied at 5 percent, with the former seeing a small uptick from 2018’s 3 percent, while the latter dropped six percentage points from last year’s 11 percent.

Beer/wine/liquor, if applicable, and fresh bakery were both chosen by 3 percent, and organic, ethnic, frozen foods, checklanes/front end and seafood all garnered 2 percent.

As for the departments most successful at generating sales, meat and produce tied this year, at 68.3 percent, with the former working its way back to share the top spot after falling to third in 2018.

Private label, which came in second last year, at 63.7 percent, plunged to 26.7 percent — a clear sign that own-brand products are in danger of losing customer interest once the novelty has worn off.

Deli/prepared foods was third this year in generating sales, at 51 percent, up two spots from 2018, while the top five was rounded out by beer/wine/liquor, if applicable, at 40 percent (down from last year’s 58.8 percent but maintaining its No. 4 position), and center store, at 36.7 percent (up two spots despite losing 20 percentage points). 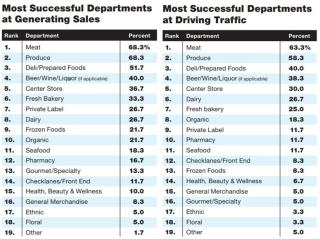 Most successful at driving traffic was meat, back on top with 63.3 percent, after again falling to third last year, behind produce and deli/prepared foods, which this year came in second, at 58.3 percent, and third, at 40 percent, respectively.

Fourth was beer/wine/liquor, where applicable, at 38.3 percent, rising from eighth place in 2018 and dislodging checklanes/front end, which plummeted to No. 12 this year, while center store was fifth with 30 percent, replacing organic, which fell to the eighth spot. 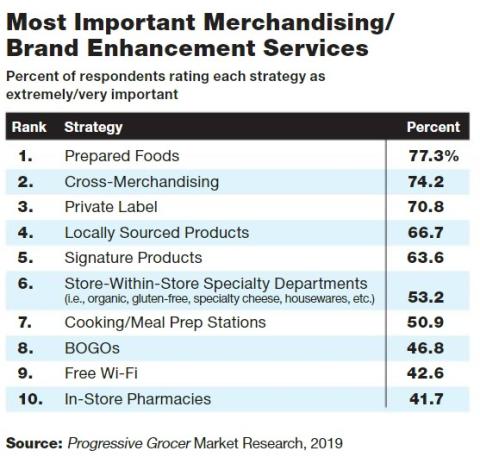 In the area of merchandising and brand enhancement services, prepared foods once again topped the list of important strategies, this year chosen by 77.3 percent of respondents, up from 73.2 percent last year.

Second was cross-merchandising, at 74.2 percent, rising from its fifth-place spot in 2018, when it was chosen by 60.7 percent.