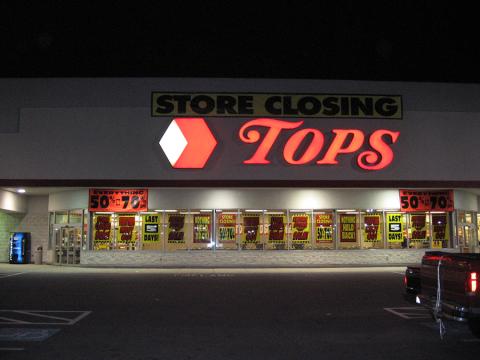 As part of its financial restructuring, Tops Markets has revealed plans to close 10 underperforming stores

As it continues its financial restructuring process after filing for Chapter 11 bankruptcy protection, Tops Markets LLC disclosed that it would close 10 underperforming stores by the end of November. The move follows what the Williamsville, N.Y.-based grocer called “a comprehensive evaluation of its store portfolio.”

The company added that it was “taking this action as it continues to focus on strengthening its financial position so it can invest further in its stores, create an even more exceptional shopping experience for customers, and compete more effectively in today’s highly competitive and evolving market.”

The 10 underperforming stores are located in Syracuse (two locations), Rochester (two locations), Fairport, Lyons, Geneva, Fulton, Elmira and Saranac Lake, N.Y. Tops noted that fewer than 600 of its 14,000-plus associates work at the stores, which represent less than 4 percent of the company’s overall sales.

The food retailer said that it would file a motion with the U.S. Bankruptcy Court seeking authority to assume the leases of continuing stores, and reject leases and close the 10 affected locations. Other than the 10 locations mentioned above, all other Tops stores are expected to remain open and are either on the list to be assumed or in the final stages of documentation, according to the company.

“The vast majority of our stores are profitable, and we are seeing strong customer support continue to drive growth in these locations,” stressed Tops CEO Frank Curci. “That said, there are a few stores that are not performing to our standards, due to a number of factors, including location, store size, lack of visibility and lease costs. We are using the tools available to us through the court-supervised process to conduct an orderly wind-down of these stores. We are pleased to continue serving our communities with existing locations that are all in close proximity to the affected stores and providing the same great service, value and convenience that our customers expect from us.”

Regarding associates who will be affected by the impending closures, Curci noted: “We recognize the important role that our associates play in driving our success and serving our customers and our communities. We will treat affected associates fairly and with the respect that they deserve. Importantly, we have many openings across our chain of stores and to the extent possible, we will work with impacted associates to find them placement at nearby store locations.”

The company also received court approval of its final agreement with the United Food and Commercial Workers Union (UFCW). At issue was the payment of pensions to union members.

“Receiving court approval of the global settlement with the UFCW is a major milestone in our court-supervised restructuring process, as it helps pave the way for our reorganization and ultimate emergence from this process,” said Curci, who pointed out that the company was “making significant progress” in that process, “and our operating results have remained strong.”

Tops operates 169 supermarkets, with five additional by franchisees under the Tops Markets banner in upstate New York, northern Pennsylvania, and Vermont. The company is No. 28 on Progressive Grocer’s 2018 Super 50 list of the top grocers in the United States.