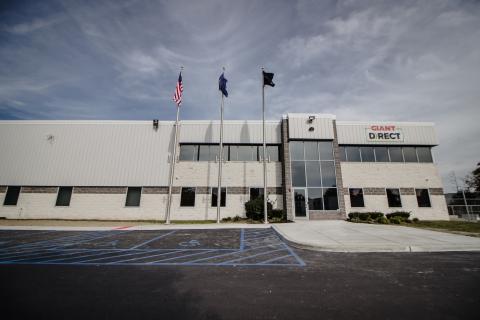 The Giant Co.'s new state-of-the-art e-commerce fulfillment center in Philadelphia will enable the grocer to make deliveries in southern New Jersey for the first time in company history.

The Giant Co. has officially opened its new Giant Direct E-commerce Fulfillment Center (EFC) at 3501 Island Avenue in Philadelphia. The cutting-edge 124,000-square-foot facility will allow the grocer to serve more customers in Philadelphia and – for the first time in the company’s 98-year history – southern New Jersey.

“Starting with the introduction of our Giant Heirloom Market format in 2019, followed by the opening of our Philadelphia flagship Riverwalk Giant in March and three more new stores across the city still to come this year, The Giant Co. has been laser-focused on how we can best serve Philadelphia families,” noted Bertram at the event. “Today is the culmination of more than two years of collaboration between our team, Ahold Delhaize USA Supply Chain, and our partners at Swisslog and AutoStore, resulting in a state-of-the-art facility that will propel our Giant Direct offering across greater Philadelphia and for the first time, southern New Jersey. Our new Giant Direct EFC represents the future of grocery and the future of The Giant Co., as we are one step closer to realizing our full omnichannel aspirations.”

“The opening of this facility is an exciting step forward as we continue to collaborate to evolve the supply chain network for the future,” said Lewis. “Solutions like micro-fulfilment centers will be an important part of the self-distributed network, positioned to serve customers whenever, wherever, however they want to shop.”

During the grand opening, The Giant Co. revealed partnerships with, and investments in, several local organizations, including a total of $5,000 donated to the Eastwick Community Garden for new equipment, a shed and a beehive; the Eastwick Library for educational programming opportunities; and Fire Station Engine 69 to support fire station staff, and a total of $3,000 donated to St. Paul's Food Pantry and Mission House, where Giant Co. team members volunteered after the ribbon-cutting ceremony.

At the EFC, two space-saving 3D grids contain totes filled with fresh and nonperishable groceries. When a customer places an order, Giant associates work beside a team of robots to quickly collect the items for bagging. After bagging, the associates put the orders in temperature-controlled totes and then on trucks for delivery to customers. The facility will carry more than 22,000 products, enabling The Giant Co. to meet rising customer demand with greater capacity, faster order fulfillment and room to grow home grocery delivery. The EFC is expected to fulfill up to about 15,000 home delivery orders each week.

Also, for the first time, beginning Nov. 16, Giant Direct delivery will be available from the facility to the southern New Jersey towns of Camden, Cherry Hill, Gibbsboro, Haddonfield, Marlton, Medford, Mount Laurel and Voorhees, with plans to introduce the service to more communities in the area over the next several months.

The new Giant Direct EFC employs more than 125 associates, but with the busy holiday season coming up, the company will seek an additional 125 workers. Among the available positions at the facility are delivery drivers, overnight crew, shoppers and stockers. The Giant Co. offers a robust total rewards package and a starting wage of $16 an hour.

The new facility increases The Giant Co.’s growing presence in Philadelphia, which has grown from a single store in 2018 to an expected 10 by the end of 2023. As well as operating three Giant Heirloom Markets and its recently opened Philadelphia flagship Riverwalk store, The Giant Co. will open a new store on Cottman Avenue on Friday, Nov. 12, followed by a location on Columbus Boulevard and a Giant Heirloom Market in the Fashion District by the end of the year.

The grocer rolled out the Giant Direct brand in February 2019, when it opened its first e-commerce hub, in Lancaster, Pa. The company currently has more than 150 pickup locations, and customers across 90% of its market area have access to online grocery ordering and delivery services.

Also, at the beginning of the year, The Giant Co. launched Choice Pass for online Giant Direct customers, providing unlimited free delivery and pickup for the price of $98 per year.

With more than 35,000 associates supporting nearly 190 stores, 132 pharmacies, 107 fuel stations, and 150-plus online pickup hubs and grocery delivery service in hundreds of ZIP codes, The Giant Co. encompasses the following banners: Giant, Martin’s, Giant Heirloom Market, Giant Direct and Martin’s Direct. Parent company Ahold Delhaize USA, a division of Zaandam, Netherlands-based Ahold Delhaize operates more than 2,000 stores across 23 states and is No. 10 on The PG 100, Progressive Grocer’s 2021 list of the top food and consumables retailers in the United States.