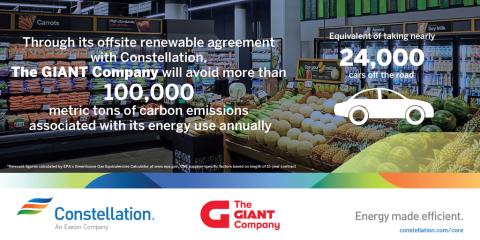 The Giant Co.'s agreement with Constellation will help the grocer avoid more than 100,000 metric tons of Scope 2 carbon emissions associated with its annual energy use.

The Giant Co. has entered into a long-term renewable energy supply agreement with competitive energy and energy solutions provider Constellation to power the grocer’s Pennsylvania operations, including select stores, fuel stations and a perishable distribution center, with renewable energy. The agreement will help The Giant Co. avoid more than 100,000 metric tons of Scope 2 carbon emissions associated with its annual energy use — the equivalent of taking almost 24,000 cars off the road, according to U.S. EPA estimates.

Backed by the grocer’s commitment, Constellation has entered into separate long-term power purchase agreements to procure a total of 80 megawatts of renewable energy. The projects, which will be developed by Asheville, N.C.-based Pine Gate Renewables, are expected to achieve commercial operation between June 2022 and January 2024.

The Giant Co. will receive about 155 million kilowatt-hours of energy annually from the long-term power purchase agreement, with that energy matched by Green-e Energy Certified Renewable Energy Certificates sourced from renewable facilities throughout the United States.

“Supporting renewable energy projects like solar is one of the many ways The Giant Co. is working to heal the planet for the families we serve today and in the future,” said Nicholas Bertram, president of The Giant Co. “This project is a significant step in further reducing our Scope 2 carbon emissions and achieving our overall sustainability goals. It reaffirms our commitment to being a sustainable grocer and responsible steward of the communities we serve, all while bringing jobs and economic benefit to the Commonwealth of Pennsylvania.”

To simplify the purchase, The Giant Co. will employ a clean-energy solution from Constellation that facilitates the development of, and boosts businesses’ access to, large-scale off-site renewable energy projects by removing the obstacles associated with traditional off-site power purchase agreements.

“We applaud The Giant Co. on supporting the development of new-build renewable energy assets through its genuine commitment to sustainability,” noted Mark Huston, president of Constellation’s national retail business. “We’re pleased to help The Giant Co. deliver on its carbon reduction goals while making a positive impact on the environment.”

In June 2020, The Giant Co. completed a two-phase solar project at its Carlisle, Pa., corporate headquarters, which included a 625-kilowatt rooftop solar array and a 7-acre pollinator-friendly solar field, enough to generate renewable power for the entire campus. The Giant Co. was also the first grocer and first Pennsylvania participant to participate in the National Renewable Energy Laboratory’s InSPIRE study, for which scientists measure and track the performance of pollinator-friendly ground cover for applications to forthcoming solar energy projects.

Representing The Giant Co., Sugar Land, Texas-based Amerex Energy Services collaborated with Constellation on the design and implementation of the renewable product structure.

With more than 35,000 associates supporting nearly 190 stores, 132 pharmacies, 107 fuel stations, and 150-plus online pickup hubs and grocery delivery service in hundreds of ZIP codes, The Giant Co. encompasses the following banners: Giant, Martin’s, Giant Heirloom Market, Giant Direct and Martin’s Direct. Parent company Ahold Delhaize USA, a division of Zaandam, Netherlands-based Ahold Delhaize operates more than 2,000 stores across 23 states and is No. 10 on The PG 100, Progressive Grocer’s 2021 list of the top food and consumables retailers in the United States.

Baltimore-based Constellation is a subsidiary of competitive energy provider Exelon Corp., which has 2020 revenues of approximately $33 billion and more than 30,000 megawatts of owned capacity comprising one of the nation’s cleanest and lowest-cost power generation fleets.