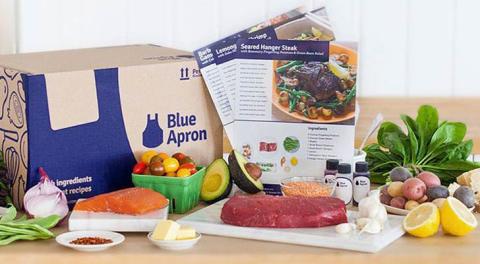 Following competing meal-kit services, Blue Apron is moving its kits into physical grocery stores, ditching its subscription-only model to expand its user base, The Wall Street Journal has reported.

Blue Apron Holdings Inc. has been hemorrhaging subscribers, reporting subscriptions of 750,000 last month, down by one-quarter compared with a year ago, according to the WSJ. Current CEO Brad Dickerson said he thinks that his company can find more customers via a combination of its subscription service and meals sold in stores or through its website.

The New York-based service has struggled after a lackluster IPO, cutting staff and losing its CEO amid a highly competitive market that's only growing more so as grocers ramp up their private label offerings and/or from partnerships with rival services. Rival service Chef’d, for example, has teamed with Southern California grocer Gelsons and Northeastern food retailer Tops Markets to extend its brand via brick-and-mortar operators, while Bashas’ and Costco have begun offering True Chef meal kits, the latter of which are specifically designed for retail and boast a long shelf life. And Albertsons has outright purchased Plated, expanding the service’s offerings to its own physical locations.

Meanwhile, in the past year, Publix,Walmart,Kroger and other grocers have introduced and/or expanded their selection of meal kits. Even kits that target specific types of solutions are rolling out at grocers: H-E-B has begun selling dinner kits targeted specifically at children, while Publix has introduced solutions designed specifically for preparation in slow cookers.

Meal kits offered through brick-and-mortar food retailers have experienced impressive gains, new research from Chicago-based market researcher Nielsen shows. Sales of in-store meal kits grew 26.5 percent over the past year, reaching $154.6 million, with growth likely attributed to two advantages: They require less commitment than those purchased via subscription-based services, and they offer more flexibility for retailers and suppliers to experiment with components and “levels” of convenience that keep customers coming back. Meanwhile, total brick-and-mortar sales for center store edibles – including shelf-stable, dairy and frozen foods – dipped 0.1 percent to $374 billion during the same period.