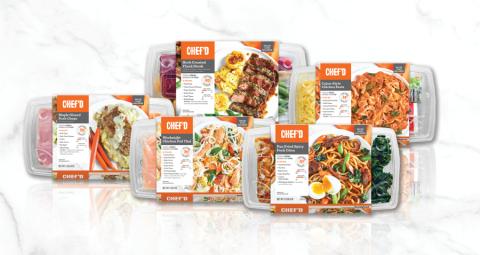 Tops Markets LLC has partnered with Chef’d to sell the service’s meal kits in dedicated displays inside physical stores, the second grocer to ink a deal with the service in recent months.

Offering “generous portions” for two made with fresh and simple ingredients that can be prepared in as little as 10 minutes, the kits contain pre-portioned ingredients and step-by-step recipe instructions. Unlike other services, Chef’d doesn't require any subscription plan for using the kits, which will be available in Top’s 171 supermarkets.

“We’re proud to be able to offer a quality meal solution like Chef’d to our customers,” said Diane Colgan, SVP, marketing for Tops. “Chef’d partners with celebrated chefs and is
led by an award winning culinary team with more than 30 years of experience in the food industry. Bringing that experience and expertise from their kitchens to our customer’s tables to share with their families is something we’re very excited about.”

As the meal-kit market becomes increasingly oversaturated, services are struggling to stay afloat: Perhaps most notably, Blue Apron has suffered since its lackluster IPO in June, having lost the steam it had gained from a 600,000-share purchase in August by New York-based activist investment group Jana Partners, when the firm sold its stake just days ago.

Brick-and-mortar stores are critical to pure-play ecommerce meal kits’ future: Over the summer, Fayetteville, Ark.-based market researcher Field Agent reported that some 78 percent of consumers want, to some extent, grocery stores to develop meal kits they could purchase in stores, suggesting that they may drop delivery kits in favor of ones sold at supermarkets. With retailers such as Kroger and Publix developing kits of their own, as well as Amazon showing increased interest in kits – which could eventually sell in Whole Foods Market stores – it’s now or never for services to get into grocers’ physical stores.

Chef’d has been particularly in need of exposure: Field Agent found that while Blue Apron dominates among the various services – with 64 percent of meal-kit users having purchased and prepared kits from the service – only 4 percent said the same about Chef’d, showing how increased exposure was critical for the service’s survival. This could explain why Chef’d inked its first partnership, with Southern California grocer Gelson’s around the same time. With Tops, Chef'd will further grow its exposure and competitive edge.

Other areas of collaboration and even acquisition: Albertsons snatched up Plated, which plans to roll its kits out across the Boise, Idaho-based company’s banners. Additionally, the CEO of Boulder, Colo.-based Green Chef has said that he's open to accepting offers for his company, while Home Chef, based in Chicago, has hired bankers to explore a possible sale, signaling an opportunity for it to be snatched up by an interested retailer.

The success of Chef’d's and other services’ partnerships, however, will boil down to several factors, among them the common, clear goal of partnership, ensuring that both the grocer and the service get something out of the deal – and that each understands and learns from what the other is doing.