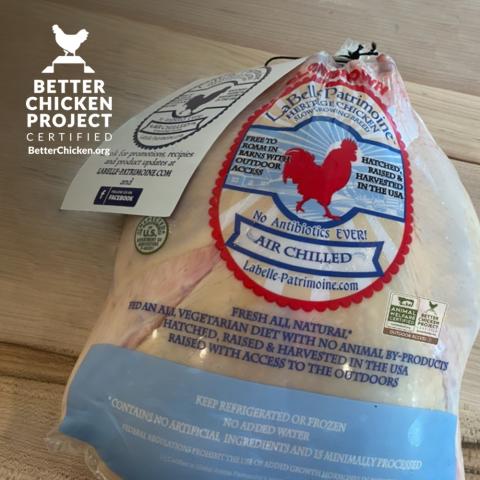 Whole Foods is the first retailer in the United States to offer chickens raised through G.A.P.’s Better Chicken Project via the LaBelle Patrimoine brand, found only at the retailer.

The first offerings from Global Animal Partnership’s (G.A.P.) Better Chicken Project are available now at Whole Foods Market, sold under one of the retailer’s exclusive brands.

G.A.P.’s Better Chicken Project is described by the Austin, Texas-based welfare group as an effort to establish a “research-based protocol for evaluating broiler chicken breeds based on behavior, meat quality, production and consistently superior welfare outcomes.” Whole Foods is the first retailer in the United States to offer chickens raised through the program via the LaBelle Patrimoine brand, found only at the retailer.

“We are incredibly proud to be a part of this program, which proves that the right combination of breed and animal welfare are what truly make a better chicken,” said Mike Charles, founder of Lancaster, Pa.-based Charles Brothers Inc., the poultry company that raises LaBelle Patrimoine’s chickens. “It has always been my mission to raise healthy, active broiler chickens of the highest quality and taste.”

“G.A.P.’s certification and labeling requirements are built into every product bearing the new Better Chicken label,” said Malissa Lucas, director of certification services at EarthClaims LLC, the North American certifying agent for G.A.P. “I have visited these birds on farm, and it is impressive to observe their activity and energy levels, particularly the way they fully interact with their living environment.”

The first certified-organic national grocer, Austin, Texas-based Whole Foods has more than 500 stores in the United States, Canada and the United Kingdom. The company is a wholly owned subsidiary of Seattle-based Amazon, which is No. 2 on The PG 100,  Progressive Grocer’s 2022 list of the top food and consumables retailers in North America.