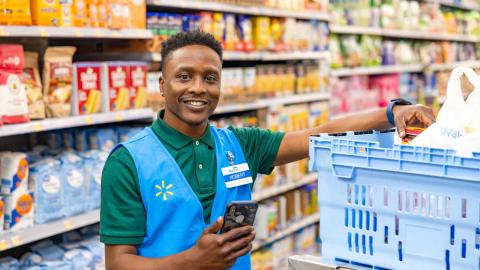 In his remarks on Walmart's Q3 for fiscal 2023, CEO Doug McMillon thanked the company's "amazing" associates.

For its third quarter of fiscal 2023, Walmart came on strong, with total revenue of $152.8 billion, up 8.7%, or 9.8% in constant currency. The company also revealed that it has agreed to a $3.1 billion nationwide opioid settlement framework designed to resolve substantially all opioid lawsuits and potential lawsuits by state, local and tribal governments, if all conditions are met.

“We had a good quarter with strong top-line growth globally, led by Walmart and Sam’s Club U.S., along with Flipkart and Walmex,” said Walmart President and CEO Doug McMillon. “Walmart U.S. continued to gain market share in grocery, helped by unit growth in our food business. We significantly improved our inventory position in Q3, and we’ll continue to make progressas we end the year. From The Big Billion Days in India, through our Deals for Days events inthe U.S. and a Thanksgiving meal that will cost the same as last year, we’re here to help make this an affordable and special time for families around the world. We have an amazing group of associates that make all this happen, and I want to say thank you.”

Walmart U.S. comp sales grew 8.2% and 17.4% on a two-year stack, while e-commerce growth was 16% and 24% on a two-year stack. Sam’s Club comp sales increased 10.0% and 23.9% on a two-year stacks, and membership income rose 8.0%, with member count reaching an all-time high. Walmart International netsales came to $25.3 billion, an increase of $1.7 billion, or 7.1%, although they were negatively affected by $1.5 billion from currency fluctuations. The segment’s operating income was led by double-digit growth at Walmex.

Walmart’s global advertisingbusiness grewmore than 30%, led by 40% at Walmart Connect in the United States and strength in Flipkart Ads.

Adjusted operating income was $6.0 billion, a 3.9% rise, while adjusted earnings per share of $1.50 excluded the effects, net of tax, of $1.11 from net losses onequity and other investments, and $1.05 fromcharges related to the opioid legal settlements.

Regarding its latest legal move, Walmart noted in a statement that it “believes the settlement framework is in the best interest of all parties and will provide significant aid to communities across the country in the fight against the opioid crisis, with aid reaching state and local governments faster than any other nationwide opioid settlement to date, subject to satisfying all settlement requirements.”

The company pointedly added: “Walmart is proud of our pharmacists and our efforts to help fight the opioid crisis. Walmart strongly disputes the allegations in these matters, and this settlement framework does not include any admission of liability. Walmart will continue to vigorously defend the company against any lawsuit not resolved through this settlement framework.”

To back up its assertions, the retailer went on to name-check its Opioid Stewardship program.

CVS and Walgreens have already reached tentative agreements to settle thousands of lawsuits over their actions during the opioid epidemic.

For its Q4 guidance, Walmart predicted consolidated net sales growth of about 3.0%, adversely affected byabout $1.3 billion from currency fluctuations; Walmart U.S.comp sales, excluding fuel, of about3.0%; consolidated operating income increase up 1.0% to down 1.0%; and an adjusted earnings per share decline of3.0% to 5.0%.

For fiscal year2023, the company raised its full-year outlook to reflect its Q3 performance:

Each week, approximately 230 million customers and members visit Walmart’s more than 10,500 stores and numerous e-commerce websites under 46 banners in 24 countries. The Bentonville, Ark.-based company employs approximately 2.3 million associates worldwide. Walmart U.S. is No. 1 on The PG 100, Progressive Grocer’s 2022 list of the top food and consumables retailers in North America. Deerfield, Ill.-based Walgreens, which operates nearly 9,000 retail locations across the United States, Puerto Rico and the U.S. Virgin Islands, is No. 5 on The PG 100. With its CVS Pharmacy subsidiary operating almost 10,000 locations nationwide, Woonsocket, R.I.-based CVS Health is No. 7 on PG’s list.