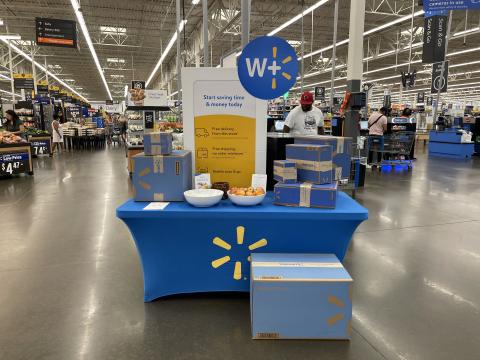 This week, Walmart added a Paramount streaming subscription to its Walmart+ loyalty program.

Grocery shoppers continued to pack the food and consumables aisles at Walmart during the second quarter as a way to beat back worsening inflation.

The retailer says it grew its market share in grocery during the quarter ended July 29 and had same-store sales increases in food in the mid-teens.

According to CNBC, Walmart also sees signs of a budget-strapped consumer who is trading down “in terms of quality and quantity,” he said. For example, he said, shoppers are increasingly using credit more than debit. They are opting for smaller packages of food and buying items like canned tuna and beans instead of deli meats and beef.

Walmart's Q2 results surpassed its guidance but were in line with its profit update last month. In July, Walmart revised its profit outlook for the second quarter and full fiscal year, primarily due to pricing actions aimed at improving inventory levels at Walmart and Sam’s Club in the United States and its mix of sales.

With the latest Consumer Price Index for food 12.2% higher than this time last year, shoppers’ ability to spend on general merchandise categories is being negatively affected. According to Walmart, this requires more markdowns to move through the inventory, particularly apparel.

"We’re pleased to see more customers choosing Walmart during this inflationary period, and we’re working hard to support them as they prioritize their spending," said Doug McMillon, president and CEO, Walmart. "The actions we’ve taken to improve inventory levels in the U.S., along with a heavier mix of sales in grocery put pressure on profit margin for Q2 and our outlook for the year. We made good progress throughout the quarter operationally to improve costs in our supply chain, and that work is ongoing. We continue to build on our strategy to expand our digital businesses, including the continued strength we see in our international markets.”

During its first quarter, the company made progress reducing inventory, managing prices to reflect certain supply chain costs and inflation, and reducing storage costs associated with a backlog of shipping containers.

For the third quarter, the retailer expects same-store sales for Walmart U.S. to grow by about 3%, excluding fuel, for the second half of the year, or about 4% for the full year. It anticipates adjusted earnings per share will decline between 9% and 11% for the full year.

During the second quarter, Sam’s Club comp sales increased 9.5%, and 17.2% on a two-year stack. Membership income increased 8.9% with member count at an all-time high.

Walmart International net sales were $24.4 billion, an increase of $1.3 billion, or 5.7%, negatively affected by $1.0 billion from currency fluctuations. Double-digit comps in three largest markets of Mexico, Canada and China.

"Economic concerns and inflation remain top of mind for brands and consumers alike, and while Walmart is not immune to these worries, the retailer has showcased that its ad revenue continues to drive traffic to its site and stores," said Brent Ramos, director of product, search at Adswerve. "Walmart’s continued investment in ad spend is paying off. Walmart has made personalized, digital ad experiences a priority and, as competition for ad space grows, the company’s reputation has allowed it to stand out as a hub for consumer engagement."

Consolidated gross profit rate declined 132 basis points, primarily due to markdowns and mix of sales in the U.S., and an inflation-related LIFO charge at Sam’s Club. Consolidated operating expenses as a percentage of net sales decreased 45 basis points, primarily due to strong sales growth partially offset by wage investments. Consolidated operating income was $6.9 billion, a decrease of 6.8%, positively affected by $173 million from an insurance settlement for Walmart Chile.

This week, the retailer added a new streaming benefit to its Walmart+ loyalty program: Paramount+ Essential.

Walmart+ members will be able to stream premium entertainment as a benefit for the first time as part of their membership starting in September. The Paramount+ Essential Plan will give Walmart+ members access to Paramount+’s breadth of hugely popular content from acclaimed original dramas such as "1883" and "Star Trek: Strange New Worlds," to the world's most popular preschool franchise, "PAW Patrol," to recent blockbuster films such as "Sonic the Hedgehog 2," to live sports.

Walmart+ will remain $98 a year or $12.95 a month and include the Paramount+ Essential Plan subscription with an added $59 value.

“We know Walmart+ is providing members real value in their every day – from grocery shopping to filling up their tank and more,” said Chris Cracchiolo, SVP and general manager of Walmart+. “With the addition of Paramount+, we are demonstrating our unique ability to help members save even more and live better by delivering entertainment for less, too. 85% of U.S. households use streaming services and Paramount+ has the premium content and broad appeal that our members are looking for – like Walmart, they have something for everyone. We’re excited about the launch and what comes next for Walmart+.”

Walmart+ has had positive member growth every month since its launch in September 2020. Most recently, the retailer combined its InHome service into Walmart+ to create efficiency for members. As members seek more ways to save money, they can now consolidate a portion of their subscriptions and get entertainment through the membership.

Each week, approximately 230 million customers and members visit Walmart’s more than 10,500 stores and numerous e-commerce websites under 46 banners in 24 countries. With fiscal year 2022 revenue of $573 billion, the company employs approximately 2.3 million associates worldwide. Bentonville, Ark.-based Walmart U.S. is No. 1 on The PG 100, Progressive Grocer’s 2022 list of the top food and consumables retailers in North America, while Sam’s Club ranks eighth.