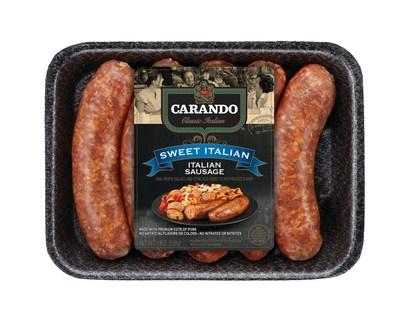 If steaks and chops are the flashier cuts, and plant-based proteins are the attention-seeking upstarts, sausage and ham are the stalwarts of the meat case. Staples of diets dating back centuries, these proteins are familiar, versatile across dayparts and, at least compared with more premium meats, affordable at a time of skyrocketing food prices.

While these products are mature and considered core items by grocers, manufacturers have been working on innovations in recent years, driven by consumer interest in a greater range of flavors and formats. There has even been a bit of borrowing from both the flashier and upstart kind of meats, with more premium sausage and ham offerings, and even some plant-based alternatives.

In the sausage segment, many innovations have taken the form of, well, new forms. Standard links and patties may still reign, but various processors have come out with their own takes on sausages.

Category leader Johnsonville Foods, of Sheboygan Falls, Wis., now offers strips that resemble and cook like bacon but are made from sausage. That item won a best new product award from Toronto-based BrandSpark International in 2021, based on a national survey of nearly 15,000 U.S. shoppers.

Some processors are downshifting into smaller sizes, which are appealing to consumers for reasons ranging from portion control to smaller households to a desire to trim costs. North Country Smokehouse recently added a new organic ham steak and a “petit ham” that weighs just over a pound and serves four.

“Consumers want convenient, modestly portioned pack sizes, and that’s hard to find in the ham category,” explains Mike Kelly, VP of business development and national sales for the Claremont, N.H.-based company. “Couple that with the limited options available in the non-GMO, organic and Certified Humane protein category, and it was clear to us, we had a winner.”

When venerable beef processor Schweid & Sons, of East Rutherford, N.J., recently decided to get into the pork category, the company opted for a smaller patty size for its fresh breakfast sausage. The premium patties are 1.5 ounces each and sold in a 12-pack.

Meanwhile, given the continued popularity of high-protein diets over the past few years, snacks made with sausage and ham represent different ways for people to enjoy cured or processed meats.

Earlier this year, Johnsonville revealed that it was testing a line of summer sausage sticks, available in original, beef and garlic varieties. Johnsonville’s sausage sticks, piloted in Circle K convenience stores and select Walmart locations, sell for $1.49-$1.79 each and are also available in eight-stick pouches with a suggested retail price range of $7.99-$8.99.

“Making delicious sausage has given us a way to deliver against consumers’ growing demand for portable, protein-forward snacks that taste good,” says Brand Manager Jackie Hendricks. “Through consumer and product research, we’ve seen excitement for a more snackable version of Johnsonville summer sausage, which has been preferred over other mainstream meat snack competitors.”

Sausage and ham are also common ingredients in co-packaged products, including high-protein snack kits and still-trendy charcuterie kits. For example, Oceanside, Calif.-based salami company Olli Salumeria has added a new pepperoni sausage and mozzarella snack kit, complementing its line of other salami and cheese pairings. Also in the snacking arena, the venerable Smithfield brand, of Smithfield, Va., came out with a Meat Lovers Power Bites product, made with sausage, bacon, ham, eggs and cheddar cheese, which can be heated in the microwave in under a minute. 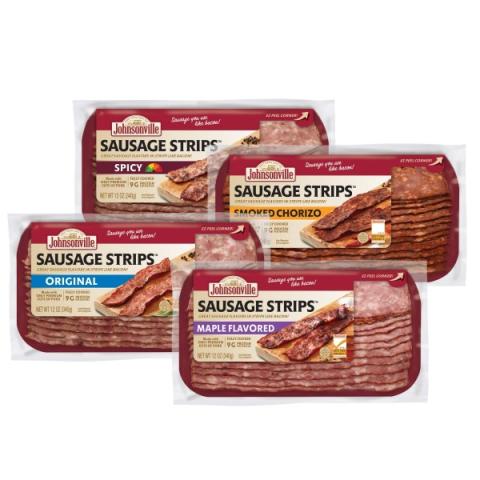 Flavor is another differentiator in ham and sausage, especially since consumers have higher expectations for quality and the overall eating experience. To deliver on those expectations, some processors are focusing on their unique cuts and processes.

Niman Ranch, for example, offers an Uncured Jambon Royale ham, described as denser than traditional hams and with a robust flavor. To appeal to those looking for a different kind of taste, North Country Smokehouse sells a Spicy Pork Cajun Tasso ham that’s rich on smoke and seasoning. The club store retailer Costco has gained some cachet among lovers of Iberico ham leg, because the Issaquah, Wash.-based retailer offers a version sourced from southern Spain.

Although sausage and ham have an intrinsic and often-signature taste on their own, added flavors are elevating these kinds of proteins to appeal to consumers’ more adventurous palates. Flavor additions include bold seasonings like North Country Smokehouse’s Cajun Tasso, as well as culinary-inspired ingredients.

Schweid & Sons’ new breakfast patties, for example, include an Italian variety made with fennel, rosemary and sage, and an apple flavor that includes real apple pieces and cinnamon for a sweet and savory kick. Italian cuisine was also the inspiration for a new sweet Italian sausage variety introduced by the Carando brand of Smithfield Foods; the pork sausage is blended with Italian herbs and spices.

As a base for sausage, chicken tends to be paired with ingredients that ramp up its flavor. To that end, the Chelsea, Mass.-based Al Fresco All Natural brand recently added new varieties to its chicken sausage portfolio, including Chicken Burrito, Nashville Hot Chicken, Chicken Parm and Fried Rice.

Beyond flavor, many of today’s sausage and ham products are made from natural or organic ingredients, including the meat itself. Schweid & Sons touts the fact that its breakfast patties are sourced from humanely raised U.S. pork that contains no antibiotics or growth-promoting hormones, and are made without fillers, nitrates, nitrites or artificial flavors or colors.

Meanwhile, natural meat company Applegate Farms, of Bridgewater, N.J., has upped the ante on its offerings with a new premium brand called The New Food Collective that uses pasture-raised meats and small-batch production methods. Meats are procured from small farms in Georgia, Kentucky and Missouri that abide by regenerative agricultural practices.

The New Food Collective line includes fresh sausages that have been touted as the first pork products to be certified by the Denver-based American Grassfed Association (AGA). Asserts Gina Asoudegan, VP of mission and innovation for Applegate: “The American Grassfed Association standard is a leap ahead of anything else out there. The organization’s name focuses on pasture, and these new sausages deliver on that. But AGA also stands for no antibiotics, no genetically modified feed and the highest animal welfare standards.”

The better-for-you movement that spurred a plethora of natural and organic products has also led to options like sugar-free hams. Hamilton, Texas-based Pederson’s Natural Farms is one example; the company offers a no-sugar spiral sliced ham that’s also raised without antibiotics or growth stimulants, and is free of artificial ingredients.

As manufacturers carve out their own niches with certain types of pork and, to a lesser extent, beef and chicken, there are more plant-based alternatives coming to market. Several alt-meat companies carry plant-based sausages, among them Beyond Meat, Impossible Foods, Field Roast and Pure Farmland. At least in deli meats, there are some plant-based and vegan sausage products available from brands such as Plantcraft and Lightlife. While these offerings are a considerably smaller part of the overall ham and sausage market, they represent the burgeoning general plant-based market.