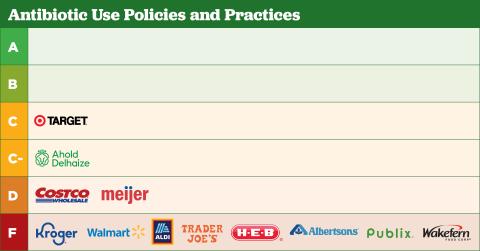 Eight of the 12 largest U.S. supermarket companies, including Walmart and Trader Joe’s, have received an “F” grade in a recent report grading corporate policies regarding antibiotic usage in their private label meat and poultry supplies. The report, “Superbugs in Stock,” was released by several members of the Antibiotics off the Menu coalition.

“It is evident that the grocery sector has taken little action to address misuse of antibiotics in their meat and poultry supplies,” noted Annette Manusevich, farming campaign manager for Waldorf, Md.-based World Animal Protection and a lead author of the report. “Medicines are being used as a band-aid solution to the high risk of disease in the cruel, crowded, high-stress conditions animals endure on factory farms. Grocery chains and other food companies have a vital role to play in protecting animals and our health, which must include providing more plant-based options to reduce the demand for more animals to enter our food system.”

“Superbugs in Stock” ranked the grocers by how well they minimize routine antibiotic usage in otherwise healthy animals. Target Corp. and Ahold Delhaize USA earned the best grades, a “C” and “C- ,“ respectively.  According to the first-of-its-kind report’s authors, no company received higher than a “C” because of “a lack of monitoring and reporting on antibiotic use, even among companies with strong policies in place. This is critical for determining whether suppliers are actually complying with company policies, reductions in use are being achieved and the health of farmed animals is being protected.”

“It’s disappointing that there is so little leadership among grocery stores to restrict the use of antibiotics in the meat and poultry products they sell,” said Laura Rogers, deputy director of the Antibiotic Resistance Action Center, Milken Institute School of Public Health, George Washington University. “If this sector would demand limited use of antibiotics in the products they source, this would lead to a significant decrease in the use of live-saving antibiotics in food animal production, which is desperately needed.”

Other coalition members that worked on the report were the Center for Food Safety, the Food Animal Concerns Trust and the U.S. PIRG Education Fund.

The overuse of antibiotics can lead to antibiotic resistance. According to recently published research, an estimated 1.27 million people died worldwide in 2019 from antibiotic-resistant infections, with historically marginalized groups more susceptible to harmful impacts, in a manner similar to other public-health challenges, including COVID-19.

Of the retailers who returned the survey that the report authors sent to companies regarding their antibiotic use policies for private label brands – Ahold Delhaize USA; The Kroger Co. (which got an “F”); and Target  – Progressive Grocer heard back only from Ahold Delhaize USA in response to the report.

In a statement, the retailer noted: “Ahold Delhaize USA companies have an unwavering commitment to driving sustainable change that leads to a healthier food system, nourishes local communities and contributes to creating a better world. As part of our companies’ commitments to health and sustainability, Ahold Delhaize USA brands proudly offer customers organic meat options through the Nature’s Promise private-brand line that were raised without the use of antibiotics. Like many sustainability issues, the use of antibiotics in farming and meat production is a complex topic, but Ahold Delhaize USA companies are committed to continuous improvement in this space and continuing to work with suppliers and other stakeholders to responsibly reduce antibiotic use.”