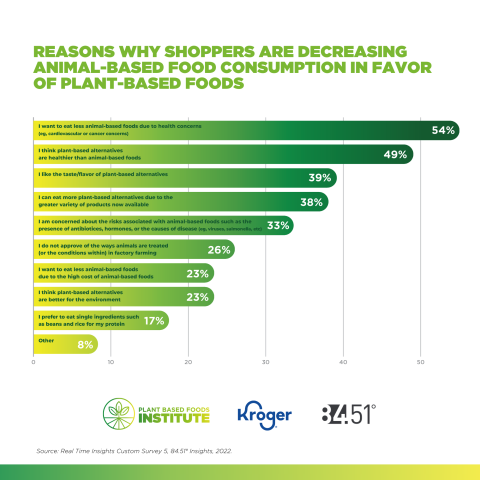 Research from Kroger, PBFI and 84.51° uncovered the reasons that shoppers are buying plant-based products, with health leading the pack.

“The research was conducted as part of Kroger’s long-term strategy predicated on listening to their customers,” explained Holly Adrien, the grocer’s natural and organics strategy and innovation manager. “Kroger is committed to learning from consumers and creating the optimal merchandising strategy for plant-based foods to best meet the needs of shoppers.”

Other findings from the “Plant-Based Foods Migration Analysis Report” are as follows:

“One of the ways we can measure the impact of plant-based foods is to understand the displacement of animal-based foods in favor of plant-based foods through comprehensive research,” said Julie Emmett, senior director of marketplace development at San Francisco-based PBFI. “We must remove barriers for consumers by understanding shopper dynamics and taking an evidence-based look to ensure shoppers can easily find their products of choice. We appreciate our long-standing collaboration with Kroger and its willingness to share these results on behalf of the industry.” 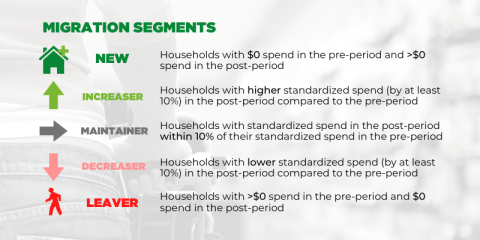 For its Plant-Based Foods Migration Analysis, Kroger and its collaborators classified each household from each target group into a migration segment by comparing spend in the post-period to the spend in the pre-period.

Along with the observed shift in spending, the research featured in its second part a survey of plant-based shoppers to better understand the motivations behind the changes. Among the Plant-Based Increaser segment, the following was noted:

When Plant-Based Decreasers were asked what would make them more likely to consume plant-based products, 64% said lower pricing and/or more frequent sales and coupons, and 58% said better taste and/or texture. Meanwhile, when Plant-Based Increasers were asked how shopping could be made easier, 61% mentioned price promotions and 29% wanted recipes.

“This research is a continuation of our years-long collaboration with PBFA using 84.51°’s robust data science to analyze plant-based food sales and the plant-based shopper to gain a holistic view of this market,” said Catherine Cowan, insights account manager at Cincinnati-based 84.51°,  a retail data science, insights and media company owned by Kroger. “We look forward to using these findings as a benchmark to understand future growth of the category.”