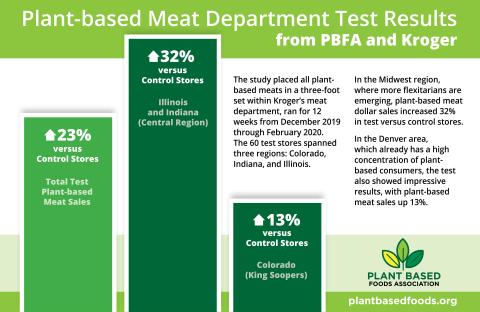 The Plant Based Foods Association and Kroger conducted a study showing that plant-based meat sales rise by double digits when plant-based options are merchandised in the meat department.

According to a study carried out by the Plant Based Foods Association (PBFA) and The Kroger Co., plant-based meat sales increased by 23% when those items were sold in the meat department.

The study, which placed all plant-based meat in a 3-foot set within the meat department, ran for 12 weeks from December 2019 through February 2020 at 60 test stores in Colorado, Indiana and Illinois.

“This research proves that it is important for retailers to place plant-based meat where shoppers expect to find it: in the meat department,” said Julie Emmett, senior director of retail partnerships at the San Francisco-based PBFA. “Other retailers are sure to make this change with this new data in hand. The increase in sales in the Midwest demonstrates there is tremendous opportunity for plant-based meats to succeed everywhere, including in the nation’s heartland.”

“This test provides one more proof point that plant-based meats have moved from niche to mainstream,” noted Kroger Merchandising Director Sean Brislin. “Kroger continues to experience double-digit growth in the plant-based category, and this test demonstrates the viability of shifting product placements to reach even more customers.”

Shopper interviews revealed how “excited and impressed” many were about the options within the new set, according to the PBFA. Almost all shoppers presumed that plant-based meats would be in the meat department alongside the animal proteins, and noted that the merchandising test made plant-based alternatives easier to find and buy, according to the study.

The trade association, which represents 170 member companies, went on to assert that despite the impact on the food industry of COVID-19, the data from Kroger shows that plant-based meat sales remain strong.

For instance, from March to June of this year, Kroger increased its plant-based meat customer count by more than 50% compared with the year-ago period. In addition, customers bought more often and in greater amounts than previously, resulting in sales growth of more than 75% during this time.

Kroger’s sales trends reflect total U.S. plant-based meat sales growth of 61%in the wake of panic buying through the end of April, the PBFA noted.

“As plant-based meat sales continue to grow, with sales increasing even more rapidly compared to pre-pandemic levels, this research becomes even more compelling for retailers to locate plant-based meats in the meat section if they want to maximize sales by reaching more consumers,” observed PBFA Executive Director Michele Simon.

Cincinnati-basedKrogeremploys nearly half a million associates who serve 9 million-plus customers daily through a seamless digital shopping experience and 2,757 retail food stores under a variety of banner names. The company is No. 3 on The PG 100, Progressive Grocer’s 2020 list of thetop food retailers in the United States.