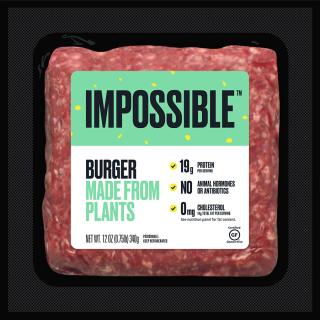 The pandemic has caused food retailers to limit meat purchases, but a plant-based substitute has gained new ground on grocery shelves, part of a trend that kicked off well before the COVID-19 outbreak.

That’s not all, though. Kroger shoppers also can order Impossible Burger items via online and mobile channels for curbside pickup and delivery.

"Kroger’s new partnership with Impossible Foods is one more way we are providing our customers with convenient access to popular fresh plant-based meats,” said Joe Grieshaber, the grocer's SVP of merchandising. “Plant-based food remains one of the fastest-growing categories at Kroger. We’re excited to continue growing our selection, especially as more customers than ever are purchasing meat products made from plants.”

As the retail profile of Impossible Burger increases during a time of extreme economic hardship, the product’s parent also is selling a cookbook, with proceeds going to No Kid Hungry, an organization focused on feeding children as schools remain closed. On Tuesday, “Impossible: The Cookbook” cost $29.90 on Amazon. For every book sold, Impossible Foods will donate $3 to No Kid Hungry. The company also has scheduled a May 14 Facebook event, “Impossible Cook-A-Thon,” to further encourage donations to the group while raising brand awareness for Impossible Burger.

Awareness has been on an upswing both before and during the pandemic. “The rollout of Impossible Burger at Kroger represents a 18-fold increase in Impossible Foods’ retail footprint so far in 2020,” the company said.