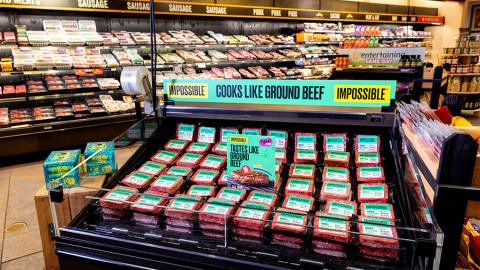 According to Redwood City, Calif.-based Impossible Foods, during the item's first full weekend on sale at Gelson’s, the Impossible Burger outsold ground beef from cows based on both revenue and total number of pounds sold, making it the top packaged good sold at Gelson’s from Friday through Sunday across the 27-store chain.

“The Impossible Burger generated more excitement than any other single product we’ve seen in more than a half-century of operations,” affirmed Rob McDougall, CEO of Encino, Calif.-based Gelson’s. “In addition to exceptional sales and volume, the launch initiated a historic consumer reaction from both our loyal and new customers who were thrilled to play a part in the future of food. We look forward to the continued success of our relationship with Impossible Foods.”

Throughout the fourth quarter and in early 2020, Impossible Foods plans to grow its retail presence by introducing the Impossible Burger at top grocery stores in key regions.

“Wegmans has offered the Impossible Burger in its Burger Bars and Pubs, in select stores, since the spring of 2019, and our customers absolutely love it,” said Ann Johnston, category merchant at the Rochester, N.Y.-based grocer. “There’s a growing demand for plant-based options, so the fact that customers will now be able to prepare Impossible Burger at home is a big deal.”

“Fairway Market started as the city’s premier produce market in 1933, with the freshest fruits, vegetables and other plants – so being the first East Coast retailer to sell the world’s hottest plant-based food harks back to our roots,” noted Abel Porter, CEO of the grocer, which operates 15 grocery stores and three Wines & Spirits shops in New York, New Jersey and Connecticut. “We can’t wait for New Yorkers to experience the Impossible Burger – whether in our in-store gourmet kitchen or in their own homes.”

As with Wegmans, starting Sept. 26, a 12-ounce package of Impossible Burger will retail for $8.99 at Fairway locations on 74th Street and 86th Street in Manhattan, and will be carried in the stores’ meat aisles and plant-based food sections.

Wegmans has nearly 50,000 employees and 100 stores in New York, Pennsylvania, New Jersey, Virginia, Maryland and Massachusetts, and North Carolina. The company is No. 16 on Progressive Grocer’s 2019 Super 50 list of the top grocers in the United States.