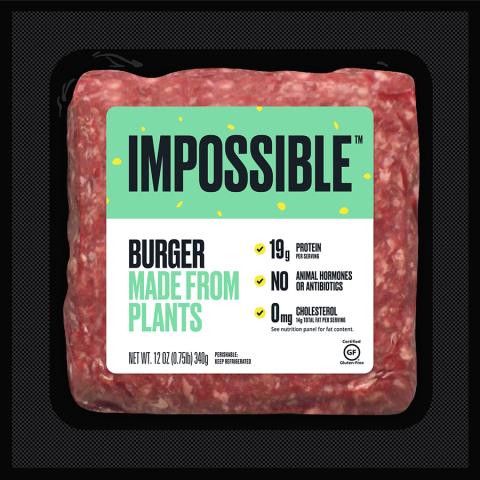 The Impossible Burger is available in the fresh and frozen meat cases at Gelsons for $8.99 per 12-ounce package

The Impossible Burger has made its worldwide debut at grocery at all 27 stores operated by Southern California specialty retailer Gelson’s Markets in Southern California. The plant-based meat is already on the menus of more than 17,000 restaurants, including such large chains as White Castle, Burger King, Red Robin, Cheesecake Factory and Qdoba.

“People who shop at Gelson’s know and appreciate great food, and the Impossible Burger is going to become a go-to favorite in home-cooked meals, from dim sum to BBQ,” said Rob McDougall, the Encino, Calif.-based company’s president and CEO. “We’ll also be unveiling delicious new recipes featuring Impossible in Gelson’s Kitchen and offering an Impossible Burger at our Wine & Tapas bars. We’re excited to bring another important world-wide first-to-market product to our customers, who love trying innovative, delicious food.”

Starting next month, shoppers can get free samples of the Impossible Burger and take part in homestyle cooking demos at select Gelson’s stores.

The kosher, halal, gluten-free certified Impossible Burger will cost $8.99 per 12-ounce package at Gelson’s, where it’s available in the fresh and frozen meat cases. The grocer is currently limiting each customer purchase to 10 packages per visit.

“Three years ago, we introduced plant-based meat to top chefs in America’s most important restaurants. They consistently told us that the Impossible Burger blew them away,” said Dr. Patrick O. Brown, CEO and founder of Redwood City, Calif.-based Impossible Foods. “We can’t wait for home cooks to experience the magic – whether using Impossible Burger in their family favorites or inventing new recipes that go viral.”

Impossible Foods isn’t the only plant-based burger maker to have its offering featured in restaurants. Rival Beyond Meat, based in Los Angeles, has made inroads at eateries such as Carl’s Jr.’s, TGI Friday’s and Del Taco as part of executive chair Seth Goldman’s plan to “democratize” healthy foods. Beyond Meat is also available at grocery stores, as is Irvine, Calif.-based Before the Butcher, which made its debut this past April at upscale California grocer Bristol Farms’ butcher counters.

To mark its rollout to the grocery channel, the company sponsored a Sept. 19 cooking show-style VIP event featuring Vilailuck "Pepper Thai" Teigen, food enthusiast and mother of social media influencer Chrissy Teigen. On Sept. 20, a diverse crew of grandmothers was set to impart their culinary wisdom, cook their favorite dishes and dish out free samples during a retail launch party, “Grandma’s House,” at the Westfield Century City’s Cabana, located on Level 3 of the Los Angeles shopping center.

During the fourth quarter and in early 2020, Impossible Foods plans to ramp up its retail presence by offering the Impossible Burger in top grocery stores in key markets. The company will launch in more grocery stores later this month, including locations on the East Coast.

“Our first step into retail is a watershed moment in Impossible Foods’ history,” noted Nick Halla, the company’s SVP, who is shepherding its retail growth. “We’re thrilled and humbled that our launch partners for this limited release are homegrown, beloved grocery stores with cult followings in their regions.”