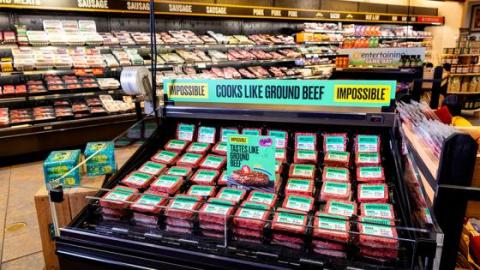 Wegmans on the East Coast started carrying the Impossible Burger

Impossible Foods first launched its flagship plant-based Impossible Burger in retail stores in September, and now its expanding this footprint more than 500%. With 777 new Albertsons banners starting to carry the product on April 17, the total number of grocery stores will be approximately 1,000.

“We’ve always planned on a dramatic surge in retail for 2020 — but with more and more Americans’ eating at home under ‘shelter-in-place’ orders, we’ve received requests from retailers and consumers alike,” said Impossible Foods’ President Dennis Woodside. “Our existing retail partners have achieved record sales of Impossible Burger in recent weeks, and we are moving as quickly as possible to expand with retailers nationwide.”

The Impossible Burger will now be at:

The Impossible Burger at retail comes in 12-ounce packages priced between $8.99 and $9.99 at retailers. Shoppers may ﬁnd the plant-based Impossible Burger fresh or frozen in the meat aisle, in the vegetarian section or in special promotional displays; grocery store placement varies by location.

The COVID-19 pandemic has led Impossible Foods to implement new measures prioritizing the health and safety of its employees and communities as well. There are stringent restrictions on external visitors to company facilities and those of co-manufacturing partners, and daily sanitizing, disinfecting and deep cleaning of all workplaces to ensure the strictest hygiene standards and utmost safety.