A funny thing happened when folks thought the frozen food category was stagnant and outmoded:  It received a new lease on life.

It wasn’t that long ago that sales across many frozen food segments were flatlining, leading some to believe that such products would be out in the cold as the fresh perimeter took off.
While the fresh sector continues to thrive, however, many frozen products are performing well and capturing interest across a broad spectrum of shoppers.

According to the 2019 “Power of Frozen” report from the American Frozen Food Institute (AFFI) and FMI — the Food Industry Association, both based in Arlington, Va., sales of frozen foods have topped $57 billion annually. The more revealing statistic is growth, and to that end, the report finds that both dollar and unit sales grew in 2018, up 2.6% and 2.3%, respectively.

Beyond sales figures, other research confirms consumer interest in frozen foods and the reinvigoration of segments within the category. In its daily tracking of U.S. consumer eating behaviors, The NPD Group, based in Port Washington, N.Y., found that frozen foods were included in the 9.8 billion at-home eating occasions last year, a 2% increase from a decade ago. That figure represents billions of meals, by NPD’s estimation.

Meanwhile, the 2019 “Power of Frozen” report concludes that an overwhelming 99.4% of U.S. households buy frozen foods.

Taking a closer look at those households, the AFFI/FMI report indicates that shoppers in urban and suburban areas consume frozen food more often. Men are more likely than women to be high-frequency frozen food consumers, and families with kids in the home between the ages of 7 and 12 tend to have higher consumption. Underscoring the broad interest in frozen, the report reveals that core frozen food consumers represent all income levels, and that frozen food consumers generally tend to rely on frozen items as both backup and planned meal occasions.

Other consumer research studies show that many frozen food shoppers are younger, boding well for the future of the category. CB Insights, a tech market intelligence company in New York, pegs frozen foods as one of a dozen industries that will do well thanks to interest among Millennials. According to CB’s findings, Millennials spend 9% more on frozen foods per supermarket visit than households of other age-based demographics. 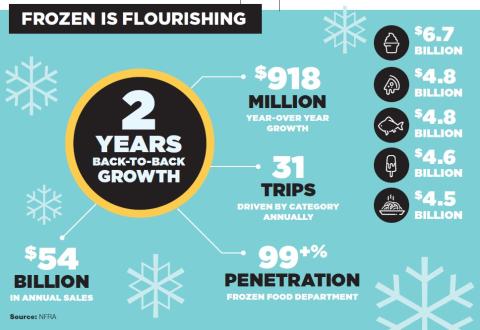 Darren Seifer, food and beverage industry analyst for NPD, says that the embrace of frozen foods by younger consumers stems from the convenience that such products offer. “As Gen Z starts to enter adulthood, we see their greater desire for convenience,” Seifer explains. “They don’t know what to make at this life stage and are willing to take the help they get from manufacturers.”

Meanwhile, there’s also good news for food retailers as they review their frozen food offerings and merchandising efforts. According to NFRA’s recent industry report, the frozen department drives 31 trips per buying household and adds $10.90 to shopping baskets per trip. “Both the frozen and dairy departments have strong, broad appeal among consumers, with the potential to drive short- and long-term growth for retailers,” notes NFRA President and CEO Skip Shaw.

The bounce in frozen over the past few years is largely attributable to product innovation, aided by industry campaigns from AFFI and NFRA focusing on the benefits of frozen foods.

Seifer likewise credits innovation for helping revitalize frozen foods as a whole. “When you look at what was being offered until the last few years, the varieties looked pretty familiar — what we’d seen for decades,” he recalls. “When we asked consumers what drove them to use frozen products, one thing that came up is that they wanted something new and different. Several manufacturers took note of that, revamped lines and changed flavors. Now there’s boldness for younger generations and products that reflect growing demographics, like Asian and Hispanic influences.” 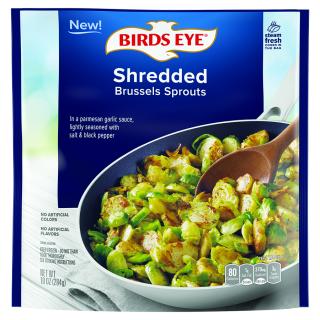 One manufacturer that took heed of the new potential in frozen was Chicago-based Conagra Brands Inc. “Working across their portfolio, from Birds Eye to Marie Callender’s and Healthy Choice, Conagra is really seeing the future in frozen foods and has repositioned itself as a market leader,” observes Burt Flickinger III, managing director at New York-based Strategic Resource Group, pointing to Conagra’s sustained growth in frozen sales.

At the same time, smaller companies have built brands in frozen, like Cascadian Farm and Amy’s. Newer brands have done especially well in frozen's organic, natural and otherwise better-for-you segments.

In addition to a focus on new product development and parallel educational and marketing campaigns, improvements in production have also helped boost the frozen category. “The development of state-of-the-art technology in flash-frozen has been big,” says Flickinger, citing success in flash-frozen produce.

Varieties include classics like macaroni and cheese and beef stew, as well globally inspired dishes such as Paella Valenciana and Japanese Style Curry Chicken. 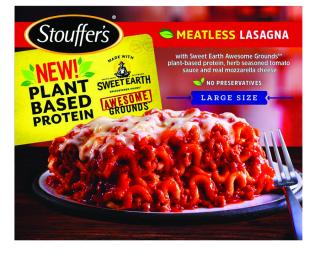 A recent driver of innovation in frozen is consumers’ growing interest in all things plant-based, from flash-frozen vegetables to entrées made with plant proteins.

“Plant-based is one of the biggest questions I get all the time, and there is movement there — it’s not the biggest, but it’s something we are slowly gravitating toward,” notes Seifer, adding that the trend is showing up in frozen as well as in fresh and center store.

“New product innovations in plant-based proteins and vegetables are breaking through,” Flickinger says.

If product launches are any indication, there’s a bumper crop of plant-based frozen foods that's part of the innovations shaping (and reshaping) the frozen category.

As in the fresh meat case, plant-based meat alternatives are changing the face of the freezer case. On the heels of its successful efforts to revive its frozen food brands, Conagra recently introduced an Ultimate Plant-Based Burger under the Gardein brand. The 4-ounce frozen burger patties, made with pea protein and boasting no GMOs, are formulated to taste like beef. Another example is a new line of Perfect Burgers from Elmwood Park, N.J.-based Dr. Praeger’s, made with non-GMO pea-based protein and sweet potato, butternut squash, beets and carrots. 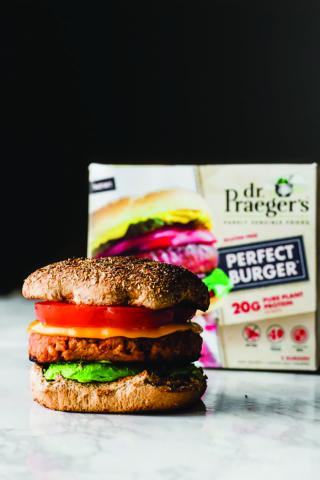 In the competitive frozen entrée arena — the largest frozen segment, with $9.2 billion in sales, according to the “Power of Frozen” report — plant-based items have been developed by several brands. The DiGiorno and Stouffer’s lines, from Glendale, Calif.-based Nestlé USA, have added meatless items using a plant-based ground beef alternative: DiGiorno Rising Crust Meatless Supreme and Stouffer’s Meatless Lasagna.

Novel kinds of frozen plant-based items are garnering buzz, too. San Francisco-based Eat Just Inc. is set to debut a frozen folded plant-based scramble product made from mung beans, the latest addition to a portfolio that also includes plant-based mayo and refrigerated Just Eggs for scrambling.

Putting the novel in novelties, frozen desserts made with plant-based ingredients are making inroads in that mature segment. Examples include new CashewMilk Dipped Salted Caramel bars from the So Delicious brand, a division of Broomfield, Colo.-based WhiteWave Foods, and Burlington, Vt.-based Ben & Jerry’s line of nondairy pints made with either almond milk or sunflower butter.

As consumers continue to snack all day, frozen snacks are another pocket of sustained interest. 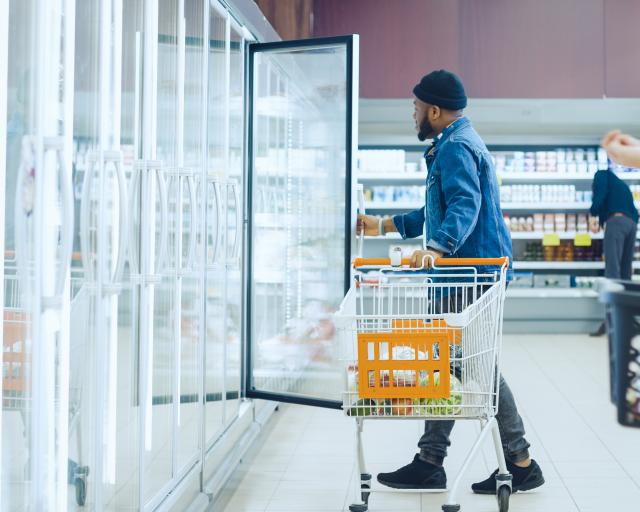 According to Chicago-based IRI, sales of products in the frozen appetizer/snack roll segment grew 2.7% from January 2019 to January 2020, reaching more than $2.06 billion.

While little bites are a big deal, that’s not to say that entrées are frozen out. NPD’s “Future of Dinner” study, for example, projects that frozen entrées will continue to grow over the next four years. Some of that growth will likely come from the plethora of plant-based frozen meals entering the marketplace.

Frozen foods, already touted for their convenience, include items designed to make prep easier for end users, from smoothie-ready fruit blends to zucchini spirals that can be used to make at-home meals.

Conagra, for its part, recently expanded the Birds Eye brand to include Veggie Shreds, with combos like white cabbage and carrots, carrots and broccoli florets, Brussels sprouts and potatoes, and sweet potatoes with broccoli and cauliflower florets.

Julie Henderson, VP of communications for NFRA, says that these kinds of shortcuts appeal to convenience-minded consumers, especially Millennials and Gen Z shoppers.

“Younger generations are embracing semi-homemade meals, which offer a lot of opportunities for frozen foods,” Henderson notes. “They are looking for more involvement in meal creation, but not necessarily more complexity.”

Although innovations and sales are ticking up, grocers can continue to entice shoppers to the freezer case through a more diverse assortment of frozen foods, as well as through merchandising programs. March is National Frozen Food Month, an opportune time for frozen promotions. Throughout the year, however, there are other ways to engage consumers to browse and buy more frozen foods.

“According to Mintel, freshness and good taste are the two most important factors when shopping for food. [In the] frozen food department, find ways to communicate freshness, and that frozen foods are real foods, just frozen,” says Henderson, adding that NFRA’s Real Food. Frozen campaign also works to lift the category with retailer collaboration.

Displays that best spotlight frozen foods, from light-up cases to the advent of “digital doors” that spotlight products inside, also hold potential for bringing shoppers into the cold.