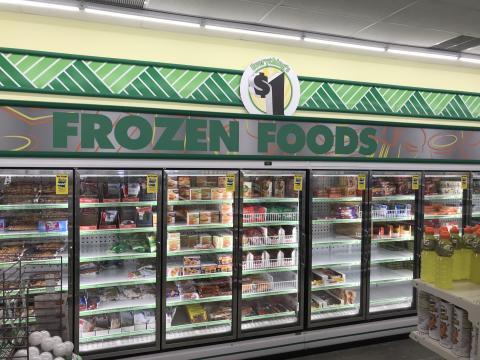 During the quarter, Dollar Tree expanded its Snack Zone feature to more than 1,000 stores

Dollar Tree is wooing shoppers with value prices on groceries and art supplies, propelling the retailer to its 12th consecutive quarter of comparable-store sales exceeding 2%.

During an earnings call for the third quarter ended Nov. 2, President and CEO Gary Philbin said that the discount retailer’s assortment of more consumables and art supplies, renovations of old stores, expansion of its Snack Zone feature, and launch of the Dollar Tree Plus store format have driven top-line sales and transaction counts at both the Dollar Tree and Family Dollar banners. During the quarter, Dollar Tree saw increases in both traffic and ticket, with traffic slightly outpacing the ticket increase.

“Our store optimization efforts and sales-driving initiatives are working,” Philbin said. “Fiscal 2019 has been a unique year as a result of several factors: the material acceleration in our Family Dollar store optimization initiatives, the consolidation of our two store-support centers into southeast Virginia, the global helium shortage, and the continued uncertainty regarding trade and the related tariffs.”

During the quarter, the company launched the new Dollar Tree Plus format in several hundred locations, as well as a new art supply feature, Crafters Square, in hundreds of stores, receiving great feedback from customers, according to Dollar Tree.

Also during Q3, the company expanded its Snack Zone feature to more than 1,000 stores. The Snack Zone is designed to provide customers with a compelling assortment of immediate-consumption products at the $1 price point to drive incremental sales, Dollar Tree noted. The feature spans categories such as cold beverages, candy, snack cakes, salty treats and other groceries.

In fact, during the earnings call, Philbin remarked that the retailer is selling so much lower-margin food and other consumables that the sales are putting pressure on margins. The executive also cited tariff pressures during the call, saying that the company was lowering its outlook for the fourth quarter due to Section 301 tariffs increasing its cost of goods sold by approximately $19 million.

Gross profit increased by $32.6 million to $1.70 billion in the quarter, compared with the prior year’s third quarter. As a percentage of net sales, gross margin was 29.7%, compared with 30.2% in the prior year. The decrease in gross profit margin was driven by higher freight and distribution costs, higher sales of lower-margin consumable merchandise primarily in the Family Dollar segment, and shrink.

Net income was $255.8 million in the third quarter, and diluted earnings per share for the quarter were $1.08, compared with $1.18 in the prior year’s quarter.

Looking ahead to the fiscal fourth quarter, Dollar Tree expects earnings per share in the range of $1.70 to $1.80, and revenue between $6.33 billion and $6.44 billion.

“With several critical initiatives now behind us, we are planning for more than 1,000 Family Dollar H2 renovations for fiscal 2020 and are increasing our focus on operating margin performance,” Philbin said. H2 stores have more freezer and cooler doors with a wider product assortment.