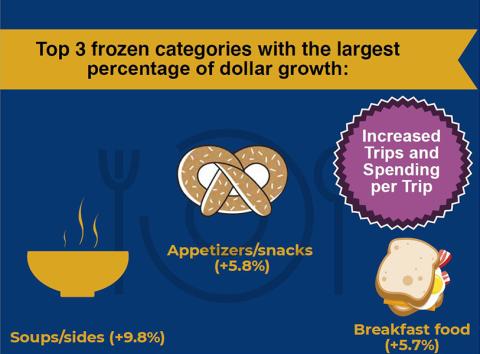 According to research from AFFI and FMI, the three frozen segments with largest percentages of dollar growth are soups/sides, appetizers/snacks and breakfast food

According to the first-ever “Power of Frozen” report from the American Frozen Food Institute (AFFI) and the Food Marketing Institute (FMI), the frozen food category is a major force at retail, generating almost $57 billion annually.

“In terms of sales, the frozen food category is only a fraction smaller than fresh produce, bigger than all other fresh perimeter departments, bigger than candy and even snacks,” noted Doug Baker, VP of industry relations at Arlington, Va.-based FMI. “While the category cannot be ignored due to its magnitude, shoppers surveyed in our research requested ways to better optimize their frozen food experience through recipe ideation, coupons, shopper education, and improved organization and signage.”

While the entrée segment is still the biggest, at $9.2 billion annually, but growth occurred in most frozen food segments, an indicator of how frozen foods contribute to the total meal solution, making them, in the words of the report, "the original meal kit."

The top three frozen segments with the largest percentage of dollar growth are soups/sides, up 9.8 percent; appetizers/snack rolls, up 5.8 percent; and breakfast food, up 5.7 percent, according to the research.

The report further found that in 2018, frozen food growth was spurred by more dollars and trips, but household engagement was mostly unchanged, with core frozen food shoppers purchasing more and visiting the aisle more frequently. Core shoppers are older Millennials balancing families and careers, who are heavily focused on convenience in shopping and meal preparation.

In addition to convenience, core frozen food shoppers responding to the AFFI/FMI survey said that they value the taste, quality, variety and consistency of the food itself, and that they’re willing to experiment more when it comes to trying unfamiliar cuisines.

Conducted by San Antonio-based market research firm 210 Analytics and sponsored by Tommy’s Superfoods, Wawona Frozen Foods, Southeastern Meats and Pictsweet Farms, “The Power of Frozen 2019” identifies the megatrends driving frozen food purchases, such as convenience, taste, variety, and claims and attributes. The report will be presented at AFFI-CON 2019 in San Diego on Monday, Feb. 25, during the Industry Spotlight session.