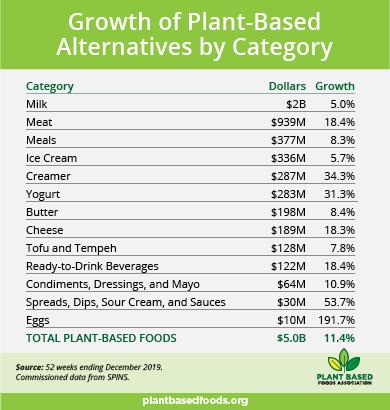 U.S. retail sales of plant-based foods have risen 11.4% in the past year, bringing the total plant-based market value to $5 billion, according to data released by the Plant Based Food Association (PBFA) and The Good Food Institute (GFI).

During that same period, the total U.S. retail food market has grown only 2.2% in dollar sales and was flat in unit sales, demonstrating that plant-based foods are a key driver of growth for retailers nationwide.

“Plant-based foods remain a growth engine, up 29% over the last two years,” noted PBFA Senior Director of Retail Partnerships Julie Emmett. “Growth is fueled by innovation in categories across the store, and retailers are responding by expanding shelf space to satisfy the rapidly expanding consumer base seeking more plant-based foods.”

“Clearly, plant-based is a lasting trend that is gaining power over time," said Caroline Bushnell, GFI's associate director of corporate engagement. "We see a steady rise in plant-based products year over year across regions, which indicates that this is not a bubble or a fad, but a real change in consumer behavior. This is a tipping point, with so much product innovation yet to hit the market.

Added Bushnell: “Shifting consumer values have created a favorable market for plant-based foods, which have significantly outpaced overall grocery sales increases for three years running, making plant-based foods a growth engine for both manufacturers and retailers. This is really only the beginning: Plant-based foods will continue to expand rapidly across the store in response to demand as consumers increasingly switch to foods that match their changing values and desire for more sustainable options. We expect further acceleration in 2020.”

The data covered the total grocery marketplace over the 52-week period ending December 2019 and was commissioned from SPINS, a Chicago-based wellness-focused data technology company and retail analytics provider.

San Francisco-based PBFA is the nation’s only trade association representing the plant-based food industry, with 180 member companies. Washington, D.C.-based GFI is a nonprofit that promotes plant-based alternatives to meat, dairy and eggs, as well as cultivated meat.