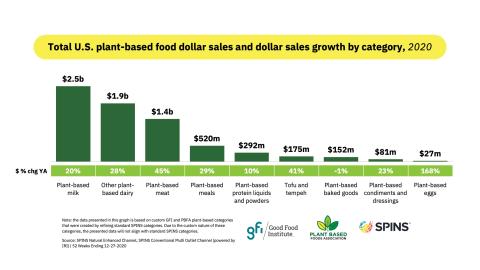 Plant-based dairy and meat were standouts in terms of retail sales in 2020, according to SPINS data commissioned by The Good Food Institute and Plant Based Foods Association.

According to information released by the Plant Based Foods Association (PBFA) and The Good Food Institute (GFI), U.S. retail sales of plant-based foods continued to climb by double digits last year, increasing 27% to $7 billion. This growth was consistent across the country, with more than 25% growth in every U.S. census region.

In fact, the plant-based food market grew nearly twice as fast as the total U.S. retail food market, which increased 15% in 2020 as the pandemic closed down restaurants and consumers stockpiled food while hunkering down at home. Fifty-seven percent of households now buy plant-based foods, up from 53% in 2019. The data, which PBFA and GFI commissioned from wellness-focused data technology company SPINS, was customized to target only plant-based products that directly replace animal-based products.

The value of plant-based meat — the second-largest plant-based category — reached $1.4 billion in 2020, with sales increasing 45%, up from $962 million in 2019. The plant-based meat category grew twice as fast as conventional meat and makes up 2.7% of retail packaged meat sales. Eighteen percent of U.S. households now buy plant-based meat, up from 14% in 2019, with 63% of shoppers classified as high-repeat customers.

The largest plant-based category, plant-based milk, has reached $2.5 billion and accounts for 35% of the total plant-based food market. As large as it already is, plant-based milk increased 20% in dollar sales in 2020, up from 5% in 2019. The item grew twice as fast as cow’s milk and is now purchased by 39% of U.S. households. Almond milk continues to lead the category, accounting for about two-thirds of plant-based milk dollar sales. Oat milk jumped to second place, ahead of soy milk, with sales more than tripling in 2020 and increasing 25-fold since 2018.

The pandemic gave retail sales of plant-based foods an additional boost at a time when interest in the sector was already skyrocketing, spurred by consumers’ interest in personal health, sustainability, food safety and animal welfare. These factors will keep driving plant-based food consumption for some time. According to Chicago-based Mintel, 35% of U.S. consumers agreed with the statement “the COVID-19/coronavirus pandemic proves that humans need to eat fewer animals.” As a result of this rising consumer interest, plant-based on-pack claims rose 116% among U.S. food and drink introductions between 2018 and 2020.

“The data tells us unequivocally that we are experiencing a fundamental shift as an ever-growing number of consumers are choosing foods that taste good and boost their health by incorporating plant-based foods into their diet,” noted Julie Emmett, senior director of retail partnerships at San Francisco-based PBFA, which represents more than 195 of the United States’ leading plant-based food companies. “As this industry surpasses the $7 billion threshold, PBFA is excited to continue our work to help build a sustainable infrastructure, including domestic ingredients sourcing, for this growing demand to expand access to plant-based foods.”

“2020 was a breakout year for plant-based foods across the store,” asserted Kyle Gaan, research analyst at Washington, D.C.-based GFI, a nonprofit funded entirely by private philanthropic support. “The incredible growth we saw in plant-based foods overall, particularly plant-based meat, surpassed our expectations and is a clear sign of where consumer appetites are heading. Almost 40% of households now have plant-based milk in their fridge, and at this rate, it won’t be long until we see just as many households purchasing plant-based meat.”

“The plant-based category has evolved to the point that retailers can’t limit who they consider the plant-based shopper,” said Dawn Valandingham, head of retail at Chicago-based SPINS. “They should now assume everyone is a potential plant-based buyer and educate them enough to see the possibilities. Between the innovation in plant-based products and the gradual return to less restrictive shopping measures, 2021 offers many opportunities for retailers to appeal to more customers and expand their plant-based offerings.”

Because of the custom nature of the categories covered by the report, the retail data doesn’t align with standard SPINS categories. Additionally, to understand consumer purchasing dynamics and demographics, GFI and PBFA commissioned consumer panel data from SPINS based on the same custom plant-based categories.