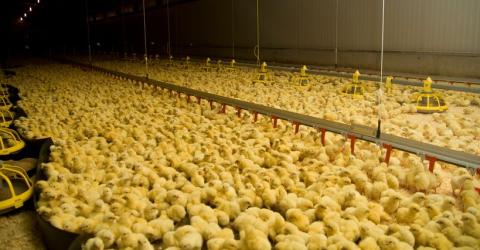 Investors are increasingly paying more attention to companies' animal welfare policies when deciding whether to invest in them.

At a time when consumers are increasingly interested in supporting companies that take animal welfare into consideration, the 2020 Business Benchmark on Farm Animal Welfare (BBFAW) report has found that some big names in the food industry still need to improve their animal welfare policies.

Backed by World Animal Protection and Compassion in World Farming, BBFAW is a global measure of corporate action on farm animal welfare standards across six tiers. Tier 1 is at the top, demonstrating leadership in farm animal welfare, and Tier 6 is at the bottom, indicating that companies have yet to acknowledge animal welfare as a business issue. The report ranks 150 food companies across 25 countries: 52 retailers and wholesalers, 63 producers and manufacturers, and 35 restaurants and bars.

All companies were assessed on their approach to managing farm animal welfare in four areas: (1) Management Commitment, (2) Governance and Management, (3) Innovation and Leadership, and (4) Performance Reporting and Impact.

The latest report reveals that 59 of the world's 150 largest food brands appear in the lowest tiers (Tiers 5 and 6), indicating that these companies provide little or no information on their approach to farm animal welfare. Additionally, one in five (31) global food companies have no farm animal welfare policy at all.

Others, like Kraft Heinz, are working hard to improve animal welfare in their supply chains and have advanced in this year's ranking. The most improved companies since the BBFAW was launched in 2012 include Nestlé, Sodexo and Barilla, which have each moved up three tiers since they were first assessed.

The companies that improved by at least one tier in the 2020 Benchmark are:

While 23 companies have moved up at least one tier, the average score for companies overall is a mere 35%, showing that there's much room for improvement.

Some of the lowest-scoring companies – ranked in Tiers 5 and 6 of the benchmark – are Subway, Hardee's/Carl's Jr., United Natural Foods Inc. (UNFI) and Publix Super Markets. Many of these companies have declined in the ranking since 2019 and lag significantly behind their peers on farm animal welfare.

"Animal cruelty is becoming more and more important for consumers – producers, supermarkets and restaurants would be foolish to ignore it. This tool brings all the commitments together in one place, providing a clear and transparent scorecard for all to see," said Steve McIvor, CEO at New York-based World Animal Protection.

While there's clearly a long way to go, the report pointed out some encouraging moves, such as:

In Canada, Maple Leaf Foods is the best-performing Canadian company in the report, remaining in Tier 3, the same as in 2019. The company has an overall commitment to farm animal welfare, with specific policies on key animal welfare- related issues, including the reduction of antibiotic use and caged housing conditions for mother pigs (breeding sows).

The report indicates that both companies lack company-wide policies on key animal welfare-related issues, including the avoidance of caged housing, reducing or avoiding routine use of antibiotics, and the avoidance of painful procedures such as dehorning.

According to the report, the United Kingdom has many of the strongest-performing companies, including Marks & Spencer and Waitrose, showing clear leadership on their approach to farm animal welfare.

"It is disappointing to see the Canadian retailers lagging behind other grocery chains such as Marks & Spencer," said Lynn Kavanagh, farming campaign manager for Toronto-based World Animal Protection Canada. "Farm animal welfare is important to many Canadian consumers, and they expect grocery chains to play a role in moving the industry towards better on-farm animal care. Investors are also increasingly paying more attention to companies' animal welfare policies, which is factoring into their investment decisions."

"COVID-19 has brought new challenges like never before, but despite this, we must continue to accelerate and drive forward the animal welfare movement,” added McIvor. “We must do better for the world's 50 billion animals who are factory farmed each year, causing immense suffering. Not only do the cruel practices of intensive farming subject animals to misery, but they expose us to potential diseases and risks, too.”

World Animal Protection cited a recent UN report that found intensive farming has been responsible for more than half of all infectious diseases passing between animals and people since 1940, indicating the links between the health of animals, people and the planet have become more urgent.