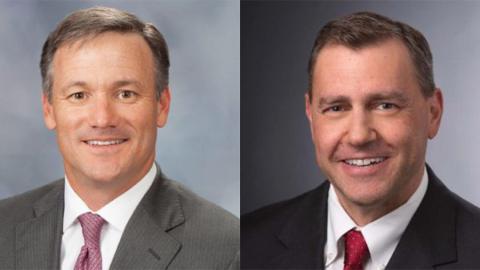 Dollar General Corp. has promoted Jeffery C. Owen to the role of COO, with responsibility for store operations, merchandising and supply chain. A Dollar General veteran with more than 25 years of retail experience, Owen returned to the company in June 2015 as EVP of store operations, overseeing almost 16,000 stores in the 44 states where Dollar General operates, in addition to the real estate and new store development functions.

During Owen’s time in this position, Dollar General has added more than 3,500 stores and boosted sales by more than 35 percent. He first joined the company in 1992 as a store manager and later held various roles of increasing responsibility.

Steven G. Sunderland has succeeded Owen as SVP of store operations. Sunderland joined Dollar General in September 2014 as SVP of store operations, with responsibility for stores mainly in the southern half of the country. Previously, he was SVP of retail operations for Office Depot Inc. from November 2013 until January 2014, held the same role at OfficeMax Inc. from May 2012 until November 2013, and was COO for Bally Total Fitness Holding Corp. from 2011 until April 2012.

Sunderland began his career in 1987 with Sears as a store manager and spent more than two decades at the company, rising through the ranks until attaining the position of VP of strategic operations.

“This enhanced management structure positively positions Dollar General as we continue moving forward as a leader in our sector,” noted Dollar General CEO Todd J. Vasos. “Jeff and Steve’s leadership, insights and demonstrated performance will help support efforts to continue to capture growth opportunities, drive our short- and long-term strategic focus, and best serve our customers. At Dollar General, investing in our employees as a competitive advantage by providing employees with growth and development opportunities is one of our core values and a cornerstone of our culture. I am confident Jeff and Steve are the right leaders for these positions, and I would like to congratulate them both on their new roles.”

Meanwhile, the company reported an 8.4% net sales increase for the 13-week second quarter ended Aug. 2 of its fiscal year 2019, while same-store sales climbed 4%, including growth in the consumables, seasonal, and home categories, partly offset by a decline in the apparel category. Also during the quarter, operating profit rose 5.9% to $577.8 million, adjusted operating profit was up 11.6% to $608.8 million, diluted earnings per share (EPS) increased 8.6% to $1.65, and adjusted EPS grew 14.5% to $1.74.

“We are pleased with our second-quarter results, driven by strong performance on both the top and bottom lines,” said Vasos. “Our results this quarter were fueled by solid execution across many fronts, including category management, merchandise innovation, store operations and continued progress with our strategic initiatives. In addition, we remained focused on disciplined cost control, which culminated in another quarter of strong earnings growth.”

Vasos noted during the call that "DG Fresh will eventually allow us to control our own destiny on assortment in these categories. This could include a wider selection of both national and private brands, as well as an enhanced offering for our better-for-you items." He went on to observe that "while produce is not included in our initial rollout plans, we believe DG Fresh could provide a potential path forward to expanding our produce offerings to more stores in the future."

The company is currently shipping from three DG Fresh facilities in Pottsville, Pa.; Clayton, N.C.; and Atlanta, with a fourth facility, in Westville, Ind., scheduled to begin shipping in a few weeks. Dollar General is now self-distributing dairy, deli and frozen products to 3,500-plus stores, with the goal of growing that number to about 5,000 by the end of the year.

Vasos also said during the call that the company would begin installing higher-capacity coolers in the majority of all remodeled, relocated and new locations, which would "better position us to capture additional sales opportunities as we move ahead, including those associated with DG Fresh."

Based on its first-half performance and expectations for the remainder of the year, the retailer raised its full-year financial outlook to net sales growth of about 8%, compared with its previous expectation of about 7%, and same-store sales growth in the low-to-mid 3% range, versus its previous expectation of about 2.5%, among other guidance. The company also reiterated its plans to carry out about 2,075 real estate projects in fiscal 2019, among them 975 new store openings, 1,000 mature-store remodels and 100 store relocations.

In common with rival dollar store operator Dollar Tree, Dollar General is working to minimize the impact that tariffs on Chinese goods would have on its customers and business through continual negotiations with vendors, product substitutions, product re-engineering and country-of-origin diversification, as the company noted during its Q2 earnings call.