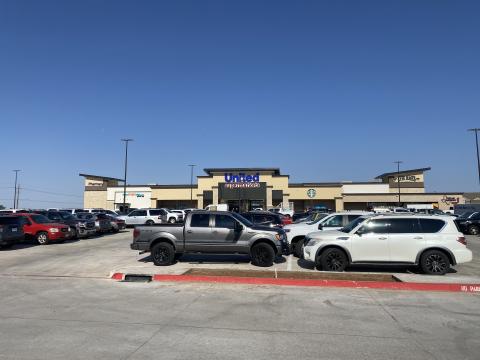 United's newest store will be the grocer's 12th store in Lubbock, Texas, and its 97th in its market area of Texas and New Mexico.

The United Family has opened its latest United Supermarkets store in its hometown of Lubbock, Texas. The store is United’s 12th store in Lubbock and its 97th in its market area of Texas and New Mexico.

Described by the company as a “next-generation” location, the store will feature such amenities as an in-house Evie Mae’s barbecue restaurant, a Taphouse section serving craft beer and wine, a Chopsticks noodle bar and sushi bar, the innovative Texas Takeout meal pickup solution, a Starbucks outlet, and Streetside grocery pickup and delivery, in addition to full-service bakery, floral and meat departments.

“This United Supermarkets location represents a culmination of innovation and adaptation after a year of unprecedented challenges,” Sidney Hopper, president of The United Family, told Progressive Grocer. “One lesson learned from the COVID-19 pandemic was that we needed more space. This store will feature the widest aisles we’ve ever put in a store. In fact, the store itself features thousands of additional square feet when compared to our ‘last-generation’ designs.”

Added Hopper: “As many in the industry know, the pandemic spurred along e-commerce years ahead of where it had been. This store was specifically designed with two e-commerce options in mind: Streetside grocery pickup and our newest concept, Texas Takeout.”

Streetside enables United shoppers to order online or via app and have the groceries delivered or available for free pickup at the curb, without even having to leave their cars. “The pickup location for [the new Lubbock location] has been positioned in an easy-to-access spot right at the front of the store that makes it more convenient than ever to shop Streetside,” noted Hopper.

He described Texas Takeout as “like Streetside, except that it focuses on food that you want to eat right now. This means all the fresh food being prepared in our kitchens, like pizza, sandwiches, fried chicken – the list goes on – is now available to be picked up curbside. Guests can pick up lunch for themselves or dinner for the whole family.”

Hopper was also enthusiastic about the location’s new restaurant, the result of a partnership with a local barbecue establishment. “This isn’t just any barbecue,” he insisted. “Evie Mae’s barbecue is award-winning and was ranked in the top 10 barbecue joints in Texas by Texas Monthly. This barbecue will be made fresh on site, and it will be available for pickup through Texas Takeout. With only one location in Wolfforth, Texas, this brings an iconic BBQ brand closer to Lubbock residents than ever.”

Beyond that, Hopper stressed that in addition to all of its cutting-edge features, the new store “will hold all of the staples – a full-service meat market, bakery, pharmacy with a drive-thru and Starbucks. Taphouse, a bar-style feature where guests can grab a glass of wine or beer while they shop, will also make an appearance. [Customers] could also take that drink out to our large patio to enjoy. We are truly excited to share this store with everyone in Lubbock.”

United Supermarkets, LLC – d.b.a. The United Family – is a Texas-based grocery chain with stores in 54 communities in Texas and New Mexico. A self-distributing company with headquarters and distribution centers in Lubbock, The United Family currently operates 96 stores under five banners: United Supermarkets, Market Street, Amigos, Albertsons Market and United Express, along with ancillary operations. The company is a wholly owned subsidiary of Albertsons Cos. Inc.