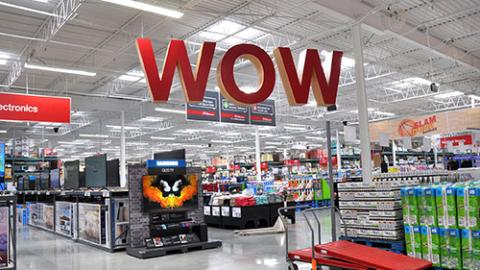 Available in-club and online, the three-day event allows BJ’s members to find savings of up to 40% off hundreds of items across the home, consumer electronics, and health and beauty categories.

“BJ’s prides itself on the value it delivers to its members every day, but we want them to be able to stretch their dollar even further, which is the premise behind the WOW Days savings event,” said Rachael Vegas, EVP chief merchandising officer at BJ’s. “In an effort to thank them for their loyalty and support, we want our members to be able to stock up on everything they not only need, but also want, for themselves and their families, but without feeling like they’ve overspent.”

Some of the deals members can expect to find during the WOW Days event include:

Further, nonmembers can join BJ’s during the WOW Days event at more than 50% off the regular membership fee of $55.

During its first quarter ended April 30, BJ’s reported that the company’s membership ranks swelled to 6.5 million. “Our membership stats are as strong as I’ve seen in my history with the company,” said Bob Eddy, president and CEO, during an earnings conference call. “We achieved this milestone earlier than expected, driven by a combination of strong renewals, as well as membership acquisition related to new club growth.”

The bulk discounter also generated $4.5 billion in total revenue, ahead of the Wall Street consensus projection of $4.24 billion. Earnings per share (EPS) were also higher than anticipated, coming in at 82 cents versus the estimated 72 cents, for a 39% bump over this time last year.

Westborough, Mass.-based BJ's operates 229 membership warehouse clubs and 160 BJ’s Gas locations in 17 states. The company’s common stock is traded on the New York Stock Exchange. BJ’s is No. 26 on The PG 100, Progressive Grocer’s 2022 list of the top food and consumables retailers in North America. Minneapolis-based Target Corp. is No. 6 on The PG 100, while Seattle-based Amazon is No. 2.