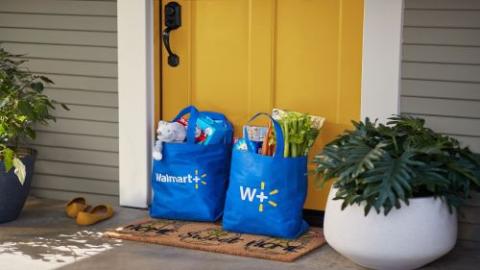 Walmart held its first members-only online sale event last weekend, and market research company Numerator is using early results and shopper surveys to take a look at how the retailer fared against Amazon’s Prime Day. Walmart+ was launched in 2020 and is the second largest retail membership program following Amazon Prime.

When it came to awareness, only 33% of Walmart.com shoppers knew about the Walmart+ Weekend event, while 94% of Amazon.com shoppers were aware of Prime Day deals beforehand. Average spend per order, however, was above both the average Walmart.com order size and those made during Amazon Prime Day 2021.

Numerator’s verified buyer surveys found that 36% of Walmart.com shoppers in the June 2-5 time period have been members for one year or more, 55% joined in the past year and 9% are trial members who joined in the past month. Some 82% of subscribers said they plan to continue their Walmart+ membership and 2% plan to cancel it.

Free shipping was the main driver for 83% of members joining the program, while free local delivery enticed 76% of shoppers to join. Inflation influenced purchase decisions for 66% of Walmart+ Weekend shoppers.

A markedly high 70% of Walmart+ Weekend shoppers said they were extremely or very satisfied with the deals offered during the sale event, while 60% of Prime Day shoppers said the same about deals available during that event.

Each week, approximately 230 million customers and members visit Walmart’s more than 10,500 stores and numerous e-commerce websites under 46 banners in 24 countries. The company employs approximately 2.3 million associates worldwide. Bentonville, Ark.-based Walmart U.S. is No. 1 on The PG 100, Progressive Grocer’s 2022 list of the top food and consumables retailers in North America. Seattle-based Amazon is No. 2 The PG 100.