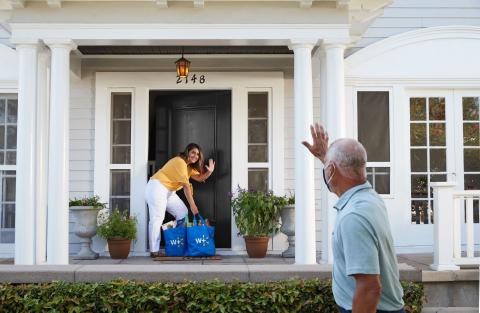 Walmart has added free shipping with no minimum purchase to the list of Walmart+ member benefits.

Walmart is stepping up its competition with Amazon Prime by removing its $35 shipping minimum for Walmart+ member purchases online.

Beginning Dec. 4, Walmart+ members will receive free next-day and two-day shipping on items shipped by the retailer, no matter the basket total. However, delivery from brick-and-mortar stores on items like groceries will still carry a $35 minimum.

“No other membership allows customers across the country to get everything from gingerbread cookies and eggnog to holiday decorations and toys delivered for free as soon as the same day," said Janey Whiteside, chief customer officer at Walmart. "Walmart+ is designed to make life easier — giving customers an option to not have to sacrifice on cost or convenience.”

Since Amazon Prime offers free two-day (and some same-day) shipping on every item, the differences between the two memberships got smaller with this latest Walmart+ perk. However, Prime is still more expensive, typically costing $119 a year, and comes with music and film offerings, while Walmart+ provides fuel discounts.

The Walmart+ membership program debuted this past September. Membership costs $98 annually, or $12.95 per month, and includes a 15-day free trial period. Other benefits from the program include the ability to use Scan and Go in stores, which lets customers shop and check out with their phones. Additionally, the retailer has expanded the number of locations where members can use their fuel savings to include Sam’s Club fuel stations across the country. Customers now have access to fuel discounts at more than 2,000 Walmart, Murphy USA and Murphy Express fuel stations, as well as access to Sam’s Club member pricing at more than 500 Sam’s Club locations.

Along with its online presence, Walmart+ has the reach of more than 4,700 stores, including 2,800 stores that offer delivery, reaching 70% of America.

“Customers have been clear — they want this benefit,” added Whiteside. “Being able to toss an item into your cart, regardless the total, and check out right away lets them knock little things off their to-do list in no time.”

The newly added Walmart+ benefit arrives just in time for the holidays as customers are gift shopping earlier than ever this year, according to Walmart. To better prepare for the holiday season, 87% of customers plan to seek out deals earlier.

To quickly get packages to its customers, Walmart is also using its stores to fulfill online orders. The retailer is employing its existing local delivery capabilities to complete orders faster while reducing the load on its online fulfillment centers.

In another effort to step up its package delivery service, Walmart launched a pilot in September in Fayetteville, North Carolina, to deliver select grocery and household essential items by drone. This was revealed one month after Amazon’s Prime Air received approval from the U.S. Federal Aviation Administration.

Bentonville, Ark.-based Walmart operates more than 11,300 stores under 56 banners in 27 countries, and e-commerce websites, employing 2.2 million-plus associates worldwide. Walmart U.S. is No. 1 on The PG 100, Progressive Grocer's list of the top food retailers in North America, while Walmart-owned Sam's Club ranks No. 9 on the list and Seattle-based Amazon is No. 2.