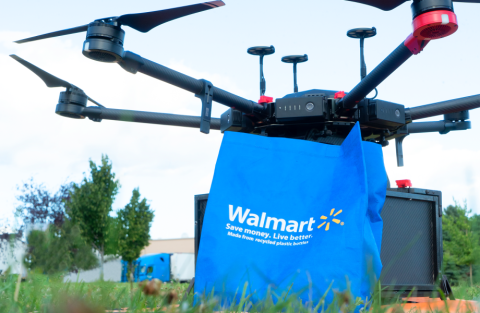 Walmart will start delivering by drone in Fayetteville, North Carolina.

Walmart has launched a pilot in Fayetteville, North Carolina, to deliver select grocery and household essential items by drone. The pilot is in partnership with end-to-end drone delivery company Flytrex, based in Tel Aviv, Israel. Its drones are controlled over the cloud using a smart and easy control dashboard that will help Walmart gain valuable insight into the customer and associate experience, from picking and packing to takeoff and delivery.

"We know that it will be some time before we see millions of packages delivered via drone. That still feels like a bit of science fiction, but we’re at a point where we’re learning more and more about the technology that is available and how we can use it to make our customers’ lives easier," said Tom Ward, SVP, customer product, for Walmart in a blog post. "At the end of the day, it’s learnings from pilots such as this that will help shape the potential of drone delivery on a larger scale and, true to the vision of our founder, take Walmart beyond where we’ve been."

Walmart isn't the only retailer to invest more heavily in drone delivery recently. In August, Amazon’s Prime Air received approval from the U.S. Federal Aviation Administration, a vital step in the e-commerce operator’s plan to operate a drone package-delivery service.

Gulf Coast grocer Rouses Markets, based in Thibodaux, Louisiana, is also launching a pilot this fall from one of its stores in Mobile, Alabama, in partnership with Deuce Drone, which is based in that city.