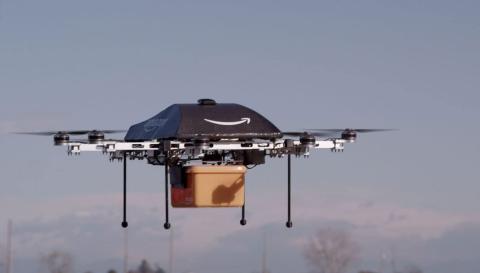 Amazon launched its drone project in 2013 and began to formally seek FAA approval in 2019.

Amazon’s Prime Air has received approval from the U.S. Federal Aviation Administration, a vital step in the e-commerce operator’s plan to operate a drone package-delivery service.

The approval signals the FAA’s view that Amazon can operate a safe delivery service to consumers via drone, and comes as Amazon is building out other parts of its logistic and distribution network, including with aircraft and delivery vans.

Amazon offered no immediate comment but reportedly will use the new FAA approval to launch tests of consumer deliveries via Prime Air drones. Amazon launched its drone project in 2013 and began to formally seek FAA approval in 2019.

“This certification is an important step forward for Prime Air and indicates the FAA’s confidence in Amazon’s operating and safety procedures for an autonomous drone delivery service that will one day deliver packages to our customers around the world,” David Carbon, VP of Prime Air, told reporters. “We will continue to develop and refine our technology to fully integrate delivery drones into the airspace, and work closely with the FAA and other regulators around the world to realize our vision of 30-minute delivery.”

Even with Prime Day delayed during this year of the pandemic, Amazon continues to invest billions in technology, facilities and services designed to offer quicker deliveries to consumers — more specifically, offering more one-day deliveries instead of shipments that take two days.

As Amazon seeks to make drone deliveries a reality — and as other merchants and logistics providers try to do what they can to keep up with new delivery services — the e-commerce company is also stepping up its food retail activities.

After months of speculation, the Seattle-based company last week opened its first stand-alone supermarket banner: a 35,000-square-foot, digitally perfected store in Woodland Hills, California, called Fresh. The Fresh banner isn't an offshoot of Amazon-owned Whole Foods Market, nor does it look like one of those checkout-less Amazon Go stores that have been popping up in urban areas across the United States, nor does it resemble the 365 banner that Amazon scrapped last year, either.

No. 2 on The PG 100, Progressive Grocer’s 2020 list of the top food and consumables retailers in North America, Amazon is also planning grocery stores in the Los Angeles and Philadelphia markets, according to media reports. Austin, Texas-based Whole Foods is No. 24 on PG's list.