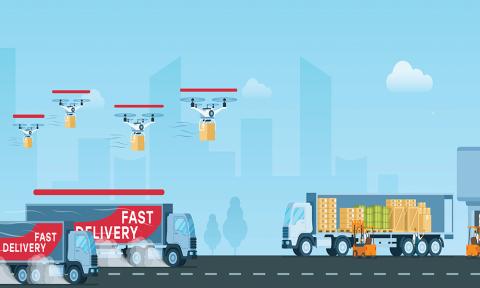 Worldwide spending on robotics systems and drones will increase 17.1% in 2020, reaching $128.7 billion, according to the International Data Corporation (IDC) Worldwide Robotics and Drones Spending Guide.

Retail is one of the industries that will see the fastest growth in robotics spending, alongside wholesale and construction. Over the 2019-2023 forecast, retail specifically will see a 29.3% compound annual growth rate (CAGR).

One of the leading use cases for robotics systems in 2020 will be pick and pack ($12.3 billion), with shelf stocking and customer service expected to grow the fastest with 46.5% CAGR and 42% CAGR respectively.

In-store robots have also found there way into some stores — like Giant Eagle, Schnucks, Giant/Martin's and Stop & Shop — for a variety of functions from cleaning up spills to recognizing out of stocks.

Drone spending is expected to be much smaller in 2020 ($16.3 billion) than robotics spending $112.4 billion, but drones have a much faster growth rate (33.3%). Consumer spending on drones will total $6.5 billion in 2020 and will represent nearly 40% of the worldwide total throughout the forecast.

The IDC Worldwide Robotics and Drones Spending Guide looks at spending data for more than 60 use cases across 20 industries in nine regions.