Not that long ago, customers were content or even overjoyed that they could order something online and it would arrive at their doorstep in a week or so. The expectation today, however, is much different.

Amazon Prime launched memberships in 2005, and then a few years later really stepped up its offerings, making two-day delivery commonplace. Fast-forward to a short time later, and there’s now a whole generation of online consumers who haven’t known anything but this speedy service.

As two-day delivery turns into same-day or even one-hour delivery — now offered by some grocers as well as Amazon, Walmart and Target on certain items — the pressure is on for retailers to satisfy consumer demands in a cost-effective manner.

“Right now, delivery is too inefficient, and the manual labor of walking up and down the aisles to do it is sucking all the life and all the profit out of their grocery business,” says Steve Hornyak, chief communications officer of Israel-based CommonSense Robotics, recently renamed Fabric. “With them using third parties or even themselves, fundamentally they’re losing money on every online transaction that they’re fulfilling.”

Enter one solution: automated micro fulfillment centers. Combining artificial intelligence (AI) and robotics at a location already close to the consumer, such as an existing store, can help maximize the efficiencies of online grocery delivery and pickup.

Some grocers have already embraced micro fulfillment centers, or are in the process of building them: Miami-based Hispanic grocer Sedano’s; Wakefern Food Corp. banner ShopRite, operating in the Northeast; Boise, Idaho-based Albertsons; and Ahold Delhaize USA banner Stop & Shop are just a few.

“The demand is definitely there from the end shoppers,” says Max Pedró, co-founder and president of Waltham, Mass.-based Takeoff Technologies. “We don’t think getting groceries online is a luxury anymore. It is a necessity. Some shoppers are going to be lost if you don’t have that format to serve them.”

Where You Already Are

Traditional grocers have one major advantage over strictly online businesses: their brick-and-mortar locations. These buildings are often referenced as one of the differentiators between Walmart and Amazon in their fight over shoppers’ online purchases, and it’s not just true for the big guys.

CommonSense Robotics (now Fabric) installed a micro fulfillment center in an underground parking garage in Tel Aviv to prove it can work in the hardest of conditions with the hardest of products, groceries.

Grocery retailers have already done the work to determine where their customers are — that’s why they built a store there — so why not leverage this for ecommerce?

“They own real estate, all their stores, and they’re close to their customers because they already did all the math, and they know they can service enough people with food, [who] are a very short drive to their facility,” Hornyak says. “If we carve out, say, 15,000 to 20,000 square feet inside that building and take a lot of the stuff that is repetitious to buy or purchase or otherwise, and automate it, you now can have a multipronged value proposition.”

This value proposition includes being able to service click-and-collect because that’s a strong proposition for grocers, as well as on-demand delivery. Both operations can be primarily automated, meaning that the retailer doesn’t need to worry about hiring additional staff for the services or handling any surges in orders.

Takeoff Technologies installs the robots and provides the software as a service for the micro fulfillment ecosystem to work.

“One option you have today is automated picking at a big facility that is very efficient, but it’s very expensive for the commitment, meaning millions of dollars, many years and a very expensive last mile,” says José Vicente Aguerrevere, co-founder, chairman and CEO of Takeoff Technologies. “The beauty is we combine the proximity of the store with the automation of a large facility, and between signing a deal and going online, it’s only three months, as opposed to three years.”

Instead of making space in an existing facility, micro fulfillment centers can also be dark stores, but the key is the proximity to customers.

“In order to make it profitable, you have to use it,” Hornyak advises. “If you build it and people don’t use it, it won’t be profitable. So as long as you have enough volume to support that, we really don’t care where it is.”

An automated micro fulfillment center combines robotics with AI to create an efficient system. There are automated totes or cubes in three separate zones — ambient, chilled and frozen — that handle only those items. After an online order is made and all three types of items are pulled, the totes come together at the end of the system to be packaged in one order.

Each tote holds a specific number of SKUs — up to eight in the case of both CommonSense Robotics and Takeoff Technologies — so like purchases are close together to be able to pick them faster.

The different packing options are all part of the operational process, which combines technology with human strengths where appropriate.

“So many people have the concern that robots are taking jobs, and we actually see the opposite: It’s humans and robots working together, but adding the humans to do what we do best,” Aguerrevere says. “It is an art and science coming together on sorting the right inventory into each of those totes, and then the entire facility.”

The major advantages of the automated micro fulfillment center are speed, productivity and overall efficiency. According to Takeoff Technologies, this system is at least 10 times more productive than roaming supermarket aisles to assemble orders, while CommonSense Robotics notes that an order of 60 items is picked in less than 10 minutes.

Speed isn't the only advantage customers will see when ordering from a grocer that employs an automated micro fulfillment center.

In execution, robots and humans are working hand in hand to increase efficiency.

One of the most prevalent complaints from customers is SKU substitutions. They’ll order their groceries only to find out that a certain type of peanut butter they were expecting is out of stock.

This difficult, and often annoying, conversation about what substitutions to allow, or even what items you’re then willing to go to the store to buy later, is eliminated with a robotic fulfillment center. Online inventory matches actual inventory.

“In a micro fulfillment center, you’d have real-time knowledge of your shelf, because the only way somebody can buy it is through the system,” Hornyak says. “Now, will you have stuff that’s out of stock? Yes. But when they place the order, you know, not an hour later, when they want to pick it up.”

The system can also improve how a grocer handles its inventory, providing AI to look at patterns and purchases to determine when to order more of a certain item. Eventually, grocers could almost fulfill their inventory in real time or on a daily basis, instead of on a weekly basis.

“Customer satisfaction is going to go through the roof,” Hornyak adds. “More and more and more, you can convert a store into something that looks more like online.”

Hornyak describes the current grocery landscape as a perfect storm brewing, with winds about to converge into a massive twister, which is efficient same-day or one-hour delivery. Customer demands are leading the charge, although somewhat influenced by other retailers, and grocers need to figure out how to profit. 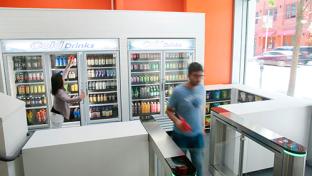 Improved customer service, lower shrink and an abundance of data 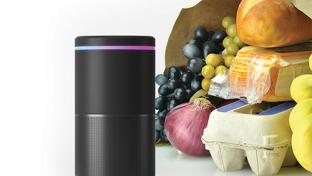 Project a partnership with Takeoff Technologies 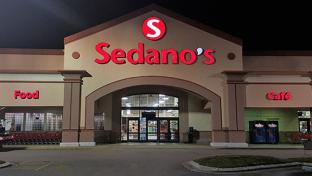 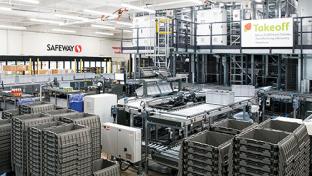 Technology
Digital-First Grocery: A Look Inside Micro Fulfillment at Albertsons 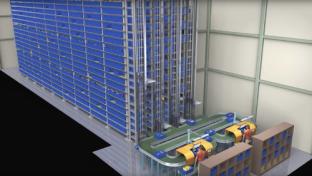 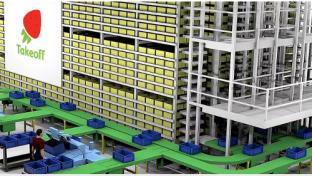 Ecommerce
Albertsons Is the Latest Among Top Grocers to Automate Ecommerce