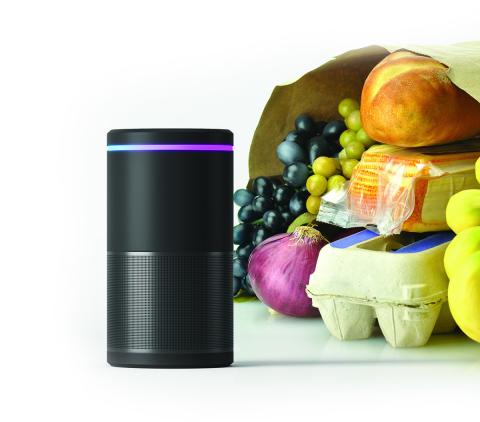 Consumers no longer want to search for you to make a purchase. They believe your business should be where they are.

From buy buttons to messaging bots and voice assistants to scan-and-bag apps, the grocery industry has been embracing contextual commerce, although there’s much more to the technology than the industry has seen so far.

Whether it’s referred to as contextual, connected, voice or conversational commerce, the key element is convenience.

“It’s about bringing the brand closer to the consumer where they are and where they prefer to be,” says Mariam Reza, VP global enterprise solutions for AI-powered messaging platform LivePerson, based in New York. “It’s a conversation between the brand and the consumer, rather than just an interaction or a transaction.”

An estimated $40 billion will be spent through voice commerce by 2022, up from $2 billion in 2017, according to research from global strategy consultancy OC&C.

“Many people find it easier to navigate the online world and make purchases using their voice rather than typing on a keyboard or clicking around with a mouse,” says Stacy Caprio, founder of Chicago-based Accelerated Growth Marketing. “It is much more convenient to speak to navigate the web and make purchases, which I think will be the main reason for voice search and purchases rising in popularity.”

Another large advantage of contextual commerce is immediacy. Consumers don’t have time to rethink their purchase, leave it sitting in their digital cart or abandon it completely when they can’t find their credit card or don’t want to exert the effort.

Take, for example, restaurant chain TGI Fridays, where customers can place an order through a conversation with a voice assistant and use a stored mobile payment or digital wallet service to complete the transaction. The relationship, however, doesn’t stop at a single transaction. TGI Fridays looks at patterns in the way consumers are purchasing and reaches out around the time someone is most likely to order again.

“They’re being proactive with what they’re learning,” Reza notes. “I get proactively asked if I want to re-order that same order again. Now you won’t lose me as a customer if I forget or if another company approaches me.”

This example is a restaurant chain, not a retailer, but the conversion rates speak volumes. TGI Fridays saw a 74 percent lift in orders when it was proactively communicating with consumers in a timely manner specific to each individual customer.

TGI Fridays’ innovation and partnership with AI-powered personal assistant bots also allow the brand to communicate to consumers in its own brand voice, using phrases such as the tagline “In Here It’s Always Friday,” or personalizing comments about menu items.

Building sticky customers is great for your business, and these features help tremendously. Again, convenience is key, and making the process as simple as possible is what contextual commerce is all about.

The last thing you want is to give consumers an experience that they’re going to walk away from because it’s just a broken experience.
—Mariam Reza, LivePerson

“Taking away all friction with one-word voice ordering completely takes away the entire abandoned-cart issue and will be a profitable game-changer for all ecommerce stores who adopt the technology,” asserts Caprio. “Right now, so many ecommerce stores lose sales from people who abandon their items in carts, due to a high-friction checkout process with many steps and points to reconsider the purchase, or simply open a new tab and start doing something else.”

According to LivePerson, there are more than 100 billion messages sent every day, with nearly 13 million texts sent every minute. These large numbers show the possibilities for brands to reach people through messaging.

“We tend to do a lot of our interactions day to day over our phones,” Reza says. “If you think about that now in the retail world, that’s where consumers are; that’s where they’re buying

“A few years ago we could say that this is something that will change the world and people are going to head toward conversational commerce,” she continues. “Today, what I’m going to tell you is that consumers are already demanding it, and will continue to do so even more.”

Whether through SMS, iMessage, WhatsApp, Facebook Messenger or a number of other messaging apps, brands can communicate with consumers, answer their questions, help them locate a product and complete the transaction.

The success of these messaging bots relies on conversational design, the ability to create an entire shopping experience similar to one that customers can receive in a store with an employee, but instead at their fingertips.

“If you’re going to have automation in the conversation, you’re also going to have humans, and that experience has to be really well designed,” Reza notes. “You must design a full journey and not just part of it. The last thing you want is to give consumers an experience that they’re going to walk away from because it’s just a broken experience.”

Customers need to be able not only to buy, but also to come back and check on the delivery status and inquire about other items, all within the same message. 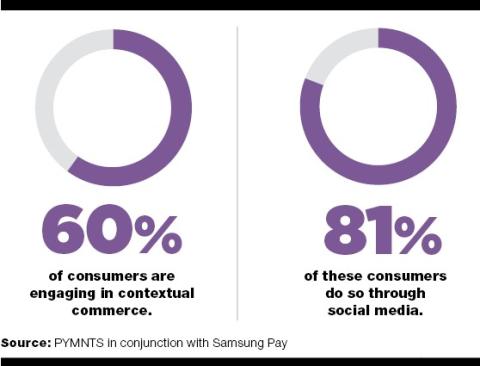 Nearly 60 percent of consumers are engaging in contextual commerce, and 81 percent of these consumers do so through social media, according to research from PYMNTS, in conjunction with Samsung Pay.

On social media, many of these transactions can be done quite simply, providing the same frictionless buying experience as seen with voice-enabled shopping.

“I’ve seen customers start to purchase items through one- or two-click clothing links on social media, which is becoming a great online advertising method,” Caprio says. “I think contextual commerce is a huge opportunity for all sellers with both online and physical stores.”

The image-heavy nature of social media, as well as its continuity across devices, provides advantages for retailers and consumers alike.

Social media sites continue to expand their partnerships with mobile payment options, such as Facebook’s relationship with PayPal, to make the process smoother and give consumers confidence that the sites are secure.

According to Reza: “Consumers are even more and more concerned about what happens to their information and if it is safe or not, but we’re not seeing people turn away from it because of concerns around the platform. More and more people are buying online through something such as Apple Pay and making convenient payments.”

She’s quick to note that all purchasing through messaging bot conversations, such as those designed by LivePerson, is fully encrypted and highly secure, so any concern should be minimal.

“The best thing we can do is look to China, where this is natural for them: They kind of skipped over the ecommerce part and went straight to conversational commerce,” says Hollie Ellison, senior director of marketing communications at LivePerson. “Over there, 90 percent of a billion users have actually bought something on WeChat [a Chinese multipurpose messaging, social media and mobile payment app].

“We would expect as this becomes more mainstream, commonplace and expected that we’ll follow suit,” Ellison adds.

The connected world is only growing more connected, with the number of what PYMNTS refers to as “Super Connected” users continuing to grow. These users have six or more connected devices, from smartphones and tablets to computers and appliances.

Further, more than 470 million new users are coming onto or using a messaging platform in the next couple of years, according to LivePerson.

Taking away all friction with one-word voice ordering completely takes away the entire abandoned-cart issue and will be a profitable game-changer for all ecommerce stores who adopt the technology,
Stacy Caprio, Accelerated Growth Marketing

As for voice-enabled ecommerce, Amazon and Google lead the pack, but other companies, such as Apple and Samsung, have gotten into the space.

“I would advise brands to adopt this technology as fast as they can right when it comes out,” Caprio says. “This will allow them to get the advantages of first adoption as well as allow them to test and pick the types of contextual commerce that make the most sense for their brand.”

Her message is clear: Brands must meet consumers where they are, on every device, seamlessly integrating ecommerce into their everyday activities.