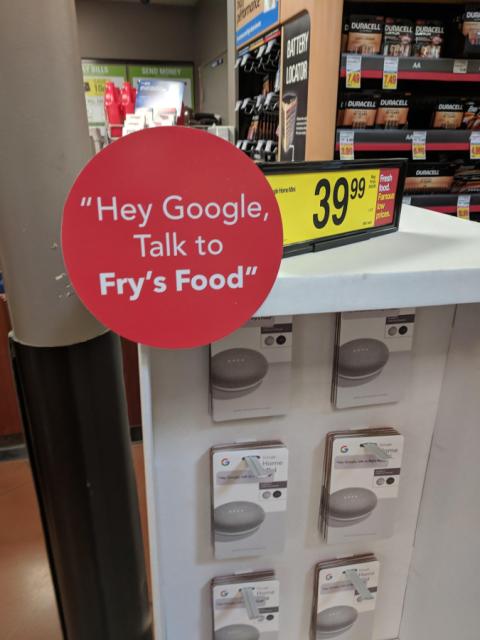 The Kroger Co. is furthering its efforts in contextual commerce by adopting voice-assistant technology for ordering groceries online.

Customers can interact with their Kroger Grocery Pickup cart via an action in the Google Assistant voice app – which can be accessed through iOS, Android and Google Assistant devices, Kroger Technology announced on its LinkedIn page. Activating the service is as simple as saying "Hey, Google" into the device.

The service has launched so far in six Kroger-owned banners: Fred Meyer, Fry's Food and Drug, QFC, King Soopers, City Market, and Ralphs. It will arrive at additional banners later this year and throughout 2019.

While connected commerce has yet to be adopted by a number of food retailers, several top grocers are adopting various forms of grocery technology to make it easier for purchasing groceries anywhere, anytime with just the click of a button or sound of a voice. Two of the largest mass merchandisers in the country already have partnered specifically with Google on this: In a little more than the past year, Minneapolis-based Target has expanded voice-activated shopping nationwide – which also allows for using the Target Redcard on purchases – through a partnership with Google, and Bentonville, Ark.-based Walmart has debuted voice shopping via Google Assistant, offering hundreds of thousands of items that can be purchased by speaking to the Google Home smart speaker or on the Google Express website or mobile app.

Other grocers that have adopted contextual commerce include:

Grocery shopping via voice assistants is anticipated to rise as shoppers increasingly adopt grocery ecommerce over the next five years, according to research from global firm OC&C Strategy Consultants. Voice shopping is expected to rocket to $40 billion in 2022, from $2 billion today.

Further, at the moment, groceries make up the most commonly shopped category in voice shopping. The research shows that 20 percent of consumers who use voice-ordering technology report ordering groceries through devices. Growth in the voice-ordering sector will be driven by a surge in the number of homes using smart speakers.

Cincinnati-based Kroger Co. operates a seamless digital shopping experience and 2,800 retail food stores under a variety of banner names nationwide. The Cincinnati-based company is No. 2 on Progressive Grocer's 2018 Super 50 list of the top grocers in the United States.