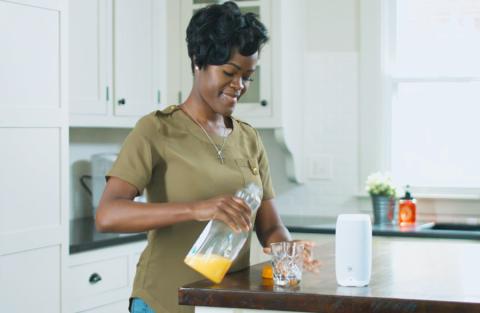 Walmart Inc. has officially introduced Walmart Voice Order in partnership with Google. Starting this month, a customer can say, “Hey Google, talk to Walmart,” and the Google Assistant will add items directly to that customer’s Walmart Grocery cart.

“Best of all, customers can be extra confident that we can quickly and accurately identify the items they are asking for with the help of information from their prior purchases with us,” wrote Tom Ward, SVP, digital operations, Walmart U.S., in a blog post. “The more you use it, the better we’ll get."

The example cited by Ward was that if a customer wants milk added to the virtual shopping cart, the Google Assistant will add the particular milk that the customer usually buys, without it having to be specified beyond the word “milk.”

The Assistant is currently available on more than 1 billion devices, among them Smart Displays like Google Home Hub, Android phones, iPhones and, watches, enabling shoppers to make grocery purchases either at home or on the go. The cross-platform technology means that a customer can use any device with Google Assistant and have items go directly to the customer’s shopping cart.

According to Ward, this “one-of-a-kind” functionality reflects current shopping practice. “We know when using voice technology, customers like to add items to their cart one at a time over a few days – not complete their shopping for the week all at once,” he noted in his post. “So, this capability aligns with the way customers shop."

Rather tantalizingly, Ward wrote, “We’re kicking off the work with Google [and] adding others to the mix as time goes on,” but provided no further details on any other platforms on which the service might be offered in the future.

Over the next few weeks, the service is expected to roll out to more and more shoppers.

Walmart and Mountain View, Calif.-based Google first joined forces on the project back in 2017. The mega-retailer has also forged partnerships of late with such technology companies as Microsoft, China’s JD.com and Japan’s Rakuten, as reported by Bloomberg.

With more than 11,300 stores under 58 banners in 27 countries and ecommerce websites in 10 countries, and more than over 2.2 million associates worldwide, Bentonville, Ark.-based Walmart is No. 1 on Progressive Grocer’s 2018 Super 50 list of the top grocers in the United States.