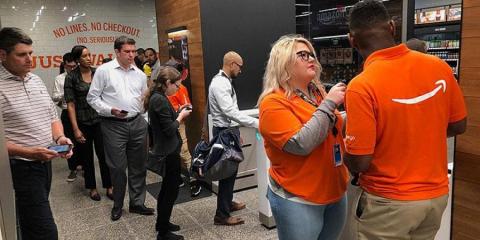 Amazon Go's first location in Chicago, and outside Seattle, opened downtown in mid-September

But it might be too soon for this information to put fear into the hearts and minds of supermarket operators nationwide. New research from InMarket – detailing 60 days of activity at Amazon Go stores in Seattle and Chicago – found that visits to the locations differ from those to traditional grocers in that the weekdays see strong traffic, but not so much the weekends, while traditional grocers rely heavily on weekend foot traffic to survive and thrive.

Granted, several of the Amazon Go stores aren't open on weekends. However, even when these are taken out of the mix, the weekday peak still exists.

"For Amazon, the decision to keep some of these stores closed on weekends indicates that they don't necessarily see Go as a grocery competitor – yet – as weekends are vital to traditional grocery business," the InMarket report said.

During the period of research, which took place in September and October, Wednesday was the week's busiest day, followed by Thursday, Friday, Tuesday and Monday.

Amazon is No. 8 on Progressive Grocer's Super 50 list of the top grocers in the United States.