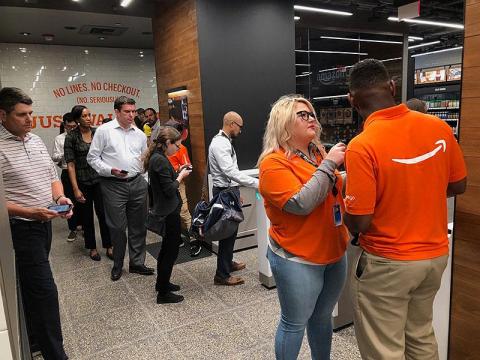 Amazon is planning to open up to 3,000 cashierless convenience stores under its Amazon Go banner by 2021, Bloomberg has reported, citing people familiar with the matter.

While Amazon refused to comment on the matter, the news outlet reported that Jeff Bezos, CEO of the Seattle-based ecommerce giant, said he sees "eliminating mealtime logjams in busy cities as the best way" to transform brick-and-mortar shopping. However, until a larger version of the format is built – or the cashierless technology enters Whole Foods Market stores – grocers face less of a threat from the expanding Amazon Go stores than from convenience stores and other grab-and-go formats.

The expansion won't come cheap, however. Bloomberg reported that the original Amazon Go, in downtown Seattle, had a $1 million price tag in hardware alone, citing a person familiar with the matter. Therefore, it could be more cost-feasible – and profitable – to narrow focus from packaged foods to ready-to-eat prepared foods, as it would require fewer cameras and sensors, and such products have wider profit margins. Currently, the stores sell grab-and-go products such as sandwiches, salads and snacks, as well as meal kits that serve two people.

Progressive Grocer sister brand Shopper Marketing got an inside look at Chicago's Amazon Go store, the banner's first outside Seattle, which opened earlier this week. Check out the photo gallery and visit recap here.

Amazon Go's original Seattle location opened its doors to the public earlier this year, and has since expanded into four locations – three in Seattle and one that opened earlier this week in Chicago. It currently has plans for at least two more locations: one in New York, and another in San Francisco.

The initial location's public debut was delayed for 10 months due to problems with the technology. During a March presentation at ShopTalk in Las Vegas, Amazon Go VPs Dilip Kumar and Gianna Puerini revealed some of those issues, which included pulling off the “just walk out” technology in a way that makes it seamless and effortless, developing algorithms that are beyond state-of-the-art for computer vision and machine learning to solve the problems of who took what, and creating the robust hardware and software infrastructure to support everything. Even retraining customers’ behavior when shopping and leaving a typical grocery store presented a challenge.

Amazon, through its Whole Foods stores, is No. 8 on Progressive Grocer's Super 50 list of the top grocers in the United States.

Other retailers and technology companies are currently either planning or operating similar stores to Amazon Go. Albertsons already has spoken of plans for a similar format, while two San Francisco-based technology companies – Zippin and Standard Cognition – have opened concepts in their hometown.