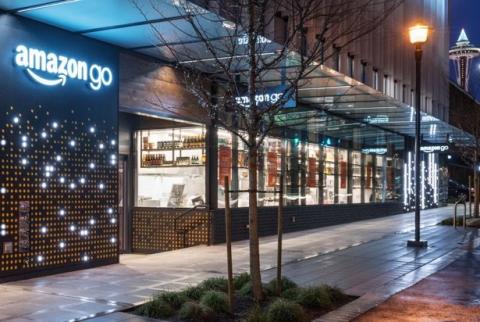 Amazon has officially opened its Amazon Go checkout-free grocery store in Seattle to the public, two months after speculation that the store was ready for non-employees, and roughly 10 months after the debut was originally scheduled, the ecommerce giant confirmed with Progressive Grocer.

The 1,800-square-foot concept, first revealed in December 2016 – seven months before Amazon said it would purchase Austin, Texas-based natural grocer Whole Foods Market – uses self-driving-car technology that employs computer vision, sensor fusion and deep learning to automatically detect when products are removed from or placed back on shelves. To use the “just walk out” technology, patrons download and check in via a mobile app, take what they want and walk out the door, where they are charged for the products they take with them. There are no lines or barcodes to be scanned in the process.

“Four years ago, we asked ourselves: What if we could create a shopping experience with no lines and no checkout?” Seattle-based Amazon said in December 2016. “Could we push the boundaries of computer vision and machine learning to create a store where customers could simply take what they want and go? Our answer to those questions is Amazon Go and Just Walk Out Shopping.”

Although the store opened for employees immediately, it did so more for testing purposes, allowing Amazon associates to buy ready-to-eat breakfast, lunch, dinner and snack options, as well as grocery essentials and Amazon meal kits. The problem , however, is that using associates – who already are Amazon converts and highly familiar with the brand and its technological prowess – as test subjects hardly constitutes a neutral pilot test environment, said David Diamond of New York-based consultancy David Diamond Associates at the time.

Amazon ultimately delayed the concept's public debut due to its difficulty in tracking more than 20 people at a time or items moved from their specific shelf space, The New York Times reported. By November, the concept worked well with individuals but continued to struggle with accurately charging people moving in groups, such as families with “grabby” children, Bloomberg said. However, engineers at that time continued to tweak sensors to recognize such things as when a child eats a product while walking the store with family, or which person to charge when couples are shopping.

For now, it sounds as if the store is without most or all of the flaws that kept it from a public debut. But that doesn't mean that grocers should be worried about the concept expanding and threatening their existence.

For instance, the fact that shoppers must use the dedicated mobile app to shop the store will likely prove to be a barrier for many and limit Amazon Go's market potential unless shopping options are expanded, said David Bishop, partner with Barrington, Ill.-based retail consultancy Brick Meets Click.

“Although some proclaim this to be the future of shopping, the reality is that this type of service will serve a subset of shoppers who find this option attractive,” he told Progressive Grocer, namely younger or more progressive-minded consumers living in urban markets – ideal for formats of this size and scope. "So when Kroger and Walmart, for instance, offer the ability to skip the checkout, some shoppers will take advantage of the solution, which will help reduce wait times for those that still prefer the old-fashioned way of paying. However, Amazon Go only offers the ability to shop via the mobile app, which limits its potential, as not every customer wants to shop this way."

Moreover, it's unclear how good a strategic fit the solution is for Whole Foods. This is a function of the format's size and how customers shop the store. Meanwhile, Whole Foods stores are about 20 times larger, and those stores tend to see larger transaction sizes related to stockup and fill-in trips.

Amazon outright said it has no plans for now to bring the technology to its Whole Foods stores, CNBC has reported. Whether this will remain the case is another story, though, as Bishop finds it odd that Amazon would develop a solution that could help address problems of long lines at Whole Foods – a common problem at brick-and-mortar stores – and instead, apply it to a format that generally doesn't experience long checkout times.

“Otherwise, you really have to wonder how technology is affecting the experience and whether it's net positive or not,” he said. “In comparison, this shopper solution is very different from the types of scan-and-go apps that Kroger or Walmart is testing, as well as how Starbucks integrated mobile ordering and payment to improve speed of service.”