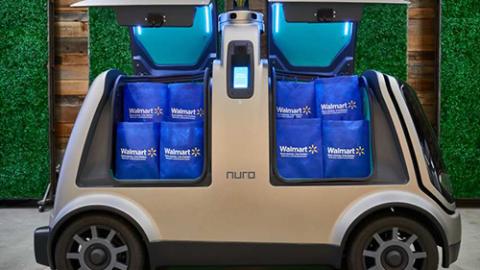 Walmart Inc. has revealed a new pilot with Mountain View, Calif.-based autonomous vehicle company Nuro in Houston, Texas. Tom Ward, SVP, digital operations for Walmart U.S., said in an announcement that with the pilot, the mega-retailer "aims to develop, refine and continue learning how to offer the best end-to-end customer experience."

Walmart isn't the first grocery retailer to partner with Nuro, and not the first in Houston either. Kroger introduced its autonomous grocery-delivery service in the Texas city earlier this year, after a debuting the partnership in Scottsdale, Ariz., in 2018.

Further, Nuro isn't Walmart's first entry into the autonomous delivery space. The company's moves in this area have included a test announced this year with Palo Alto, Calif.-based autonomous-vehicle company Gatik in the retailer's hometown of Bentonville, Ark., to make deliveries between two stores; a pilot with Burlingame, Calif.-based technology company Udelv to introduce its second-generation autonomous delivery van, the Newton, in Surprise, Ariz.; a plan to deliver groceries via self-driving vehicles in November 2018 through a pilot program with Ford; and a pilot in the Phoenix area with Mountain View-based technology company Waymo to provide customers with rides to and from stores in self-driving cars to pick up online orders.

"Our unparalleled size and scale have allowed us to steer grocery delivery to the front doors of millions of families – and design a roadmap for the future of the industry. Along the way, we’ve been test-driving a number of different options for getting groceries from our stores to our customers’ front doors through self-driving technology," wrote Ward in a blog post. "We believe this technology is a natural extension of our Grocery Pickup and Delivery service and our goal of making every day a little easier for customers."

Walmart continues expanding its Grocery Pickup and Delivery service, currently with nearly 3,100 pickup locations, and deliveries from more than 1,600 stores.

Walmart operates more than 11,300 stores under 58 banners in 27 countries, and ecommerce websites, employing 2.2 million-plus associates worldwide. The company is No. 1 on Progressive Grocer’s 2019 Super 50 list of the top grocers in the United States.