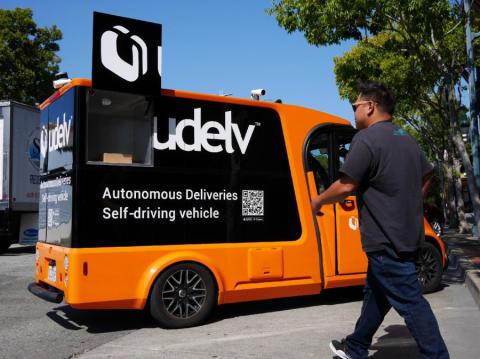 In Surprise, Ariz., the mega-retailer will team with Burlingame, Calif.-based technology company Udelv to introduce the latter's second-generation autonomous delivery van: the Newton. With 32 secure compartments to help keep groceries safe and chilled, the new van was developed over the past 12 months following thousands of deliveries for dozens of clients.

"This partnership with Walmart is an affirmation of our goals and vision: that [autonomous delivery vans] can improve lives and drive the future of ecommerce," Udelv said.

Walmart first announced its plan to deliver groceries via self-driving vehicles last November through a pilot program with Ford. The pilot began in Miami-Dade County, with the aim of learning more about how the big-box retailer can use the autonomous vehicles to deliver fresh groceries to customers and gather data on how shoppers wish to interact with autonomous vehicles. Several months before, the retailer revealed a pilot in the Phoenix area with technology company Waymo to provide customers with rides to and from stores in self-driving cars to pick up online orders.

The other grocery giant to test delivery via self-driving cars over the past year has been Cincinnati-based Kroger, which, in partnership with driverless car pioneer Nuro, piloted its own service in Scottsdale, Ariz. It officially launched the service last month in the same area.

Bentonville, Ark.-based Walmart is No. 1 on Progressive Grocer’s2018 Super 50 list of the top grocers in the United States.