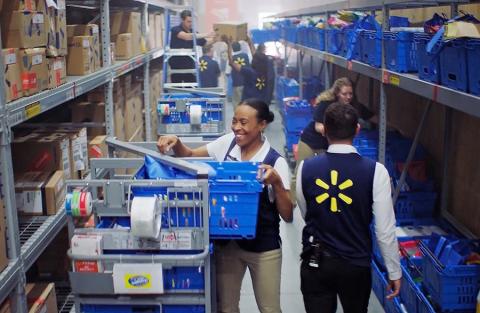 Walmart's U.S. ecommerce sales and comps continue to rise, aided by a strong performance in grocery

For its Q2 2020, Walmart Inc. posted a U.S. ecommerce sales increase of 37 percent, including strong growth in online grocery, along with a 7.3 percent rise in U.S. comparable sales on a two-year stacked basis – the mega-retailer’s strongest growth in more than a decade. The segment’s operating income climbed 4 percent, marking its fifth straight quarter of growth.

“From a performance point of view, we’re pleased with the strength we see in the business,” noted Walmart President and CEO Doug McMillon. “Customers are responding to the improvements we’re making, the productivity loop is working, and we’re gaining market share. We’re on track to exceed our original earnings expectations for the year, and that’s possible because of the work our associates do every day.”

McMillon further noted that the company was “gaining market share in key categories, including food, consumables, health and wellness, and toys,” while EVP and CFO Brett Briggs observed of Walmart U.S., “Comp sales growth reflects strength in grocery, including strong growth in private brands. We’ve been pleased with the consistently strong performance in food and consumables.”

Net sales at Walmart International came to $29.1 billion, a 1.1 percent dip. Excluding currency, net sales were $30.4 billion, a 3.3 percent rise. Strength in Walmex and China was offset by softness in the United Kingdom and Canada, the company noted.

Operating income fell 2.9 percent, or 2.4 percent in constant currency, which, according to Walmart, was better than planned, with strong results in the U.S. businesses. As anticipated, the inclusion of Indian ecommerce company Flipkart in Q2 2020 adversely affected profit results.

Among the Q2 highlights cited by the company were Walmart U.S. ending the quarter with more than 2,700 grocery pickup locations and more than 1,100 delivery locations, the unveiling of Walmart InHome Delivery, a service bringing fresh groceries and everyday essentials directly into customers’ homes, starting this fall; having the NextDay delivery service from Walmart.com cover about 75 percent of the U.S. population; the launch of same-day pickup nationwide at Sam’s Club; a collaboration with other major companies as part of the FDA's program to evaluate the use of blockchain to protect pharmaceutical product integrity; an agreement with U.S. Solar for 36 community solar gardens; and the completion with Electrify America of 120-plus car-charging stations at Walmart stores across the country, with plans for expansion.

Walmart’s great quarterly performance is no fluke, according to Eli Finkelshteyn, CEO and co-founder of Constructor.io, a San Francisco-based cloud-based search-as-a-service provider, who believes that the mega-retailer’s strong results are due to its successful digital initiatives and solid online grocery options that enable it to beat Seattle-based ecommerce behemoth Amazon at its own game.

Finkelshteyn said of Walmart: “As they continue to focus on the quickly growing online grocery business in Middle America, where their brand is powerful and they have many locations, their strong ecommerce growth will continue.”