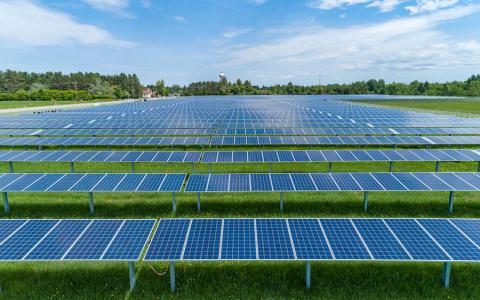 Walmart has reached an agreement with the United States Solar Corp. (US Solar) to subscribe to 36 of the latter’s community solar gardens in the state of Minnesota.

The 1-megawatt (MW) community solar gardens will generate clean, renewable energy and provide energy savings to Walmart locations in 13 Minnesota counties. The first solar gardens have completed construction, with the rest slated to be operational by the first half of 2020.

The concept allows businesses, public entities and residents to subscribe to an off-site solar garden without having to site solar power directly on their property, enabling subscribers to lower their retail electricity costs while supporting clean, local energy. Subscribers receive energy savings in the form of a bill credit on their retail electric bill based on the amount of energy produced monthly by their subscribed portion of the solar gardens.

“Solar is a vital component of Walmart’s expanding renewable-energy portfolio,” noted Mark Vanderhelm, the mega-retailer’s VP of energy. “Walmart plans to tirelessly pursue renewable-energy projects that are right for our customers, our business and the environment. This community solar gardens initiative with US Solar is moving us in the right direction toward our renewable-energy goals.”

Added Martin Mobley, CEO of US Solar, which has offices in Minneapolis and Fairfield, Conn., “We commend Walmart for their leadership in corporate renewable-energy adoption and are proud to have Walmart as an anchor subscriber in so many of our projects, supporting further development of community solar in Minnesota.”

The bill credits that Walmart will receive are based on Minnesota’s Value of Solar methodology, which takes into account the value of the solar energy delivered to the utility by the community solar gardens, in addition to other grid and environmental benefits.

Last month, the company struck a deal to have New York-based C2 Energy Capital LLC provide solar power at 46 stores across five states, and its recently announced plans for a new home office will feature solar panels atop parking decks. Walmart is working toward a goal of being supplied by 50 percent renewable energy by 2025.

Bentonville, Ark.-basedWalmart operates more than 11,300 stores under 58 banners in 27 countries, as well as ecommerce websites, employing more than 2.2 million associates worldwide. The company is No. 1 on Progressive Grocer’s 2019 Super 50 list of the top grocers in the United States.